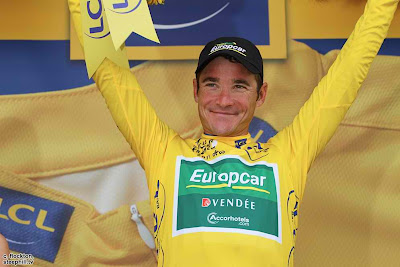 The Tour de France has exited the Pyrenees, and in a surprising turn of events, the general classification favorites have been unable to wrest the yellow jersey from the shoulders of the courageous Frenchman Thomas Voeckler.

Even seven-time Tour champion Lance Armstrong took note of the performance, today indicating via Twitter that he thought Voeckler could win the Tour de France if he made it to the top of the Plateau de Beille with the leaders, which he did.

Armstrong himself had to go up against Voeckler's steely resolve in the 2004 Tour de France, and while he was able to finally unseat the Frenchman on the first day in the Alps.

"He has 2:06 on Evans. Final TT is 42km. He's French. It's the Tour de France. He won't lose 2:06 in the final time trial assuming he keeps them close on Alpe d'Huez. His teammate Pierre Rolland has been a rock star and has to continue to be. Lastly, the dude knows how to suffer. Will be fun to watch."
Posted by Recovox at 3:20 PM