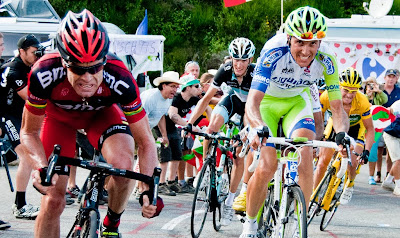 They are fierce rivals in the saddle, fighting tooth and nail for three weeks to try to win cycling's biggest prize - the Tour de France yellow jersey.

But Australian Cadel Evans and Italian Ivan Basso share one common and deeply private source of motivation that if successful will see both riders meet atop the podium on the Champs Elysees in Paris on Sunday and provide the tour with one of the most heart-warming finales in modern times.

As Evans and Basso enter the third and most punishing week of the 3430-kilometre tour, both riders will tap into the motivation of honouring their deceased Italian mentor and trainer Aldo Sassi.

Sassi, who died last December from a brain tumour, was honored on Saturday at a dinner in Bormio, Italy, after Mapei Day - named after the training centre that Sassi headed and an annual ride that takes thousands of cyclo-tourists up the twisting Stelvio Pass in the Italian Alps.

Evans and Basso could not attend because of their tour commitments, but they were there in spirit.

As the three-week tour continued after Monday's rest day with stage 16, a 162.5 kilometre leg from Saint Paul Trois Chateaux in the Drome of Provence to Gap at the foot of the Alps, Evans was still third overall, two minutes and six seconds behind the French race leader Thomas Voeckler.

But Evans, whose bid to win the tour last year was cruelled when he crashed and broke his elbow on stage eight when he took the yellow jersey - only to lose it in tears on stage nine, said on Monday that Sassi was still a driving force behind every pedal stroke he makes.

''Aldo is always in my thoughts when I'm suffering. Last year, riding the tour with a broken arm was nothing compared to seeing his family suffer,'' he told The Age. ''He is the one man who has had faith in me through my entire road career. Only my legs worked harder than he did for me.''

Meanwhile Basso, who won last year's Giro d'Italia after serving an 18-month ban for admitting intent to dope, was still fifth overall at 3.16.

Basso visited Sassie shortly before he died and vowed to the popular Italian trainer that he would do all he could to make this year's podium in the tour. ''Aldo is all the time in my heart,'' Basso told The Age, touching the left side of his chest. ''He is a friend and all day his memory is with me.

Basso is getting stronger as the tour continues, and benefited from the staccato attacks by Andy and Frank Schleck.

''This tour is open, but we exit the second week with Voeckler riding really, really strong,'' Basso said.