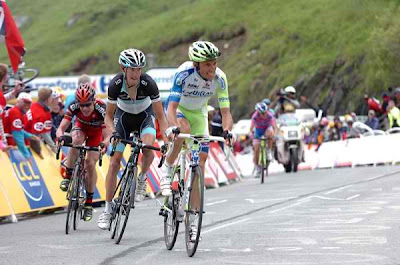 Perhaps the broadest smile at the summit of Luz-Ardiden belonged to Ivan Basso (Liquigas-Cannondale), as the Italian put his troubled Tour de France build-up behind him with a forceful showing on the race's first mountain stage.

Immediately on crossing the line, a remarkably fresh Basso could scarcely keep a grin from his face, even if his initial assessment of his day's work was a cautious one.

"It's only the first day in the mountains, so let's stay calm," he said. "I think we rode very well, but it was the first summit finish and there's still a lot to do in this Tour."

After emerging from doping control a short while later, however, Basso had time to be more expansive on what was his most impressive performance at the Tour since before his suspension for his implication in Operacion Puerto. He finished in fourth place on the stage after appearing to be among the strongest of the podium contenders, and moved up to fifth overall as a result.

"I'm smiling because it was a good performance," Basso said. "I'm very happy because I hadn't had very good sensations for a few months, since the accident I had."

A fall in training at Mount Etna in May meant that Basso had struggled in the weeks immediately before the Tour, and although his Pyrenean starter had whetted the appetite, he pointed out that the real meat of this Tour de France is still to come.

"This is only the antipasto of this Tour, because we have another two days in the Pyrenees and then the tough phase in the Alps," Basso grinned.

Team manager Roberto Amadio had told Cyclingnews on the eve of the stage that other teams would set the agenda in the Pyrenees while Basso kept his powder dry, but although Leopard Trek made the running on the Tourmalet, it was Liquigas-Cannondale who seized the initiative at Luz-Ardiden.

The lime green colours of Sylvester Szmyd, in particular, shone through the gloom of the cavernous final climb, as the Pole thinned out the lead group with a relentless stint of pace-setting in the finale. Basso was fulsome in his praise of the harmony of his team.

"I'm really very happy with the work of my teammates, they were very strong in the flat, and then you saw what Szmyd did on the climbs, it was the Szmyd that you all know," Basso said. "The only off-key note of this Tour for me so far was the team time trial, but my teammates have shown in the stages since how strong they are."

When Szmyd swung over, it was Basso himself who did the most to lead the overall contenders in their attempts to close down Fränk Schleck's attacks in the finale, and the Italian came home just ahead of Cadel Evans, Andy Schleck and Damiano Cunego.

"Today it was important to see how the legs responded," Basso said. "That was the objective for all the favourites, and I think they all confirmed themselves. Rather than watching the others, I think about myself, and knowing that you're going well is an important injection of confidence."

Contador down but not out

One favourite whose performance offered more questions than confirmations was Alberto Contador, as Basso and Evans's forcing the pace in the final kilometre dislodged the Spaniard from the select group chasing Fränk Schleck and stage winner Samuel Sanchez.

Contador conceded 13 seconds to Basso, and never appeared comfortable at any point during on the long haul to the summit. Although Basso's morale was doubtless boosted by the sight of the Spaniard floundering on the final kick to the line, he stressed that Contador had the ability to recoup his losses in one fell swoop.

"I think Contador has had a lot of problems in the first part of the Tour, a lot of falls, but let's be careful not to underestimate him," Basso warned. "Contador is a champion. You need to remember that he might only need one real attack to win the Tour de France."
Posted by Recovox at 1:30 PM