Ivan Basso will keep fighting for victory, says he is getting stronger 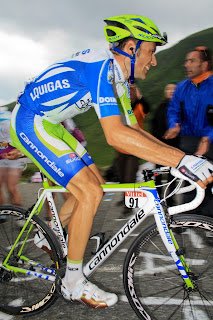 Despite dropping down in the overall standings from fifth to seventh yesterday, Ivan Basso (Liquigas-Cannondale) still believes in himself and his team to fight for victory in the Tour de France this week.

The double Giro d’Italia winner (2006 and 2010) correctly predicted yesterday's outcome on Monday’s rest day: “[Alberto] Contador is still dangerous: he could flip the situation with one of his trademark attacks.”

Basso lost time to Contador, Cadel Evans and Samuel Sanchez yesterday when the three riders got away on the final climb of the day. Contador put in a surprising attack on the category two climb that was brought back by Leopard Trek. A second attack saw him distance himself from the favourites with only Evans and Sanchez able to match his speed.

"I had a problem with my saddle. Just when I returned, Alberto attacked," Basso told BN/De Stem. "I was forced to chase. I lost some time, but am not worried."

Basso chose to not defend his Giro crown this year, something that was taken over by the Spaniard, opting instead to focus his season around the Tour. It’s seems to have paid off as the Italian is still within an arms reach of victory.

"I am a diesel, all right. I have to learn to cope. If anyone jumps, I take time to get on their wheel."

The next three stages of the Tour will be decisive for men like Basso and the Schleck brothers who are not known for their time trial ability. It will be their last opportunity if one them were to win this year’s Tour de France.

"It's about conserving energy for as long as possible," said the Italian who has twice before finished on the Tour’s podium.

"The next three days we really climb, get the longer mountains. They will suit me better."

The Italians form was doubted coming into the race this year as a training fall on Mt Etna in May disrupted his preparation. He needed several stitches to his face and had to spend a few days off the bike.