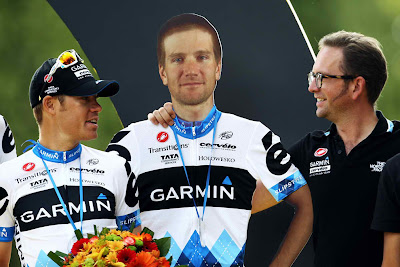 Dave Zabriskie , who crashed out in Stage 9 with a broken wrist, was there in spirit when Vaughters carried a life-sized photo of the American to the podium. 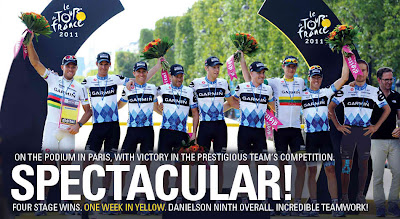 Cadel Evans has been keeping fans back home up all night watching him become the first Australian to win the Tour de France.

Over the years, Evans has been better known for failing to live up to expectations. He finished second in the 2007 Tour and was expected to win the next year, but was runner-up. Last year, he was leading the race but crashed and fractured his left elbow.

This time, persistence, planning — and a little good luck — paid off.

"I hope I brought a great deal of joy to my countrymen, my country," Evans said Sunday after climbing onto the winner's podium on the Champs-Elysees. "It's been a pleasure and an honor to fly the flag over here."

The 34-year-old Evans, the oldest champion since before World War II, stood on the podium wrapped in his national flag, his eyes tearing up as he listened to the Australian national anthem. He then embraced Andy and Frank Schleck , who finished second and third, respectively.

The brothers from Luxembourg had pushed him all the way to the end but were finally defeated by his solo strength in Saturday's race against the clock.

"We've had a great Tour, but we're most satisfied in the way that we did it," said Garmin-Cervelo manager Jonathan Vaughters on the team's website. "This team is about teamwork, sacrifice, working as a unit, and that's exactly how we rode this Tour."

The team title is determined by the time of the top-three riders in each stage.

A brief look at Sunday's 21st and final stage:

The other jerseys: For the first time, Cavendish takes home the green jersey, awarded to the best sprinter, which he has long coveted. The "King of the Mountains" polka-dot jersey goes to Olympic road race champion Samuel Sanchez of Spain. Pierre Rolland of France wins the white jersey given to the top young rider.