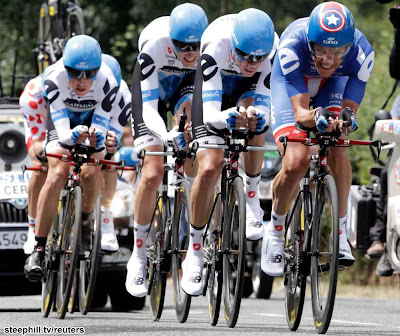 I arrived in Gois on Monday with the rest of the team in argyle style, that style being a private jet. It’s a luxury to fly this way and it happens rarely for us so when it does its hard not to be excited about it.

We came a day or two earlier than many of the other teams because we wanted to do some recon and properly check out the team time trial course. That course is FAST, very few turns and it should be quite the show of team speed and power. The team was strong in our warm up laps and we’ll certainly be going for it on Stage 2.

The following day we rode the last 100K of Stage 1. It felt good to be on the course with the guys. We were loose but serious about our recon. What we found was quite a nice drag to the finish. The run-in to that finishing climb will be difficult but we hope to be in the mix.

Yesterday we did the blood control and the team presentation in the French Amusement Park. The pageantry was all very French and we had some fun with it. Let me tell you what happened because it was quite funny (at least to us).

They organized us below the ground and we were scheduled to rise up on a platform to ground level. They wanted us to be standing in a straight line, evenly spaced across the stage, centered as possible. But at the last moment while we were under the stage, surrounded by a huge wardrobe department, Thor found a wig and put it on looking to truly play the role of the God of Thunder. Surprisingly, someone found him a hammer and he gladly assumed the character.

We decided that we would rise from below the ground and the rest of the team would bow to Thor and raise their arms in a gesture to his grandness. Thor, wig and hammer, wearing the World Champion’s Jersey was absolutely loving every second of it, and the truth is so were we. But the French stage coordinator who was organizing our team was completely freaking out. He was afraid the stage was not designed to deal with our antics and he was fearful it might tip or collapse.

The whole episode was really spur of the moment, just the guys and I having fun, being ourselves, enjoying the moment. It was all quite funny to us but then to see the photos on the internet was really quite enjoyable. Unfortunately some of the comments were from people who took it all too seriously and thought that the Tour forced Thor and the team to perform in that way. Some accused us of being actors or entertainers and not athletes. For us it was both funny and entertaining, and why not entertain the fans that were there. Clearly the one who got the most out of it all was Thor. He really seemed to enjoy himself, and maybe too much, as he’s been looking for us to bow down ever since.

Well our chef has arrived, and that’s important to someone who’s on a specific diet. He’ll be cooking some vegan foods for me which is perfect, especially since I’ve been living off of my energy bars and powered mixes since I arrived.

I have to say that I’m digging the new Tour kit. Our clothing this year is spot on. Everyone loves the changes and the fit and the predominantly white kit will serve us well over the next 3 weeks.

I also received two new bikes for the Tour. The new Cervelo S5, which feels super fast, as well as a newly painted TT bike. It all feels special and I’m really pleased by that.

I did my traditional pre-race full body shave (except for the head). It’s become a ritual for me and helps me to further zone into the moment. It’s also quite funny as well, as for many professional athletes in other sports, when the playoffs come around the shaving stops and its all about hair growth. For cyclists, and especially me, it’s all about getting the perfect shave, the less hair the better.

Was more than fired up last night as I watched the docu, The Corporation. I don’t really understand how some people get away with what they get away with. Frustrating.

My private Tour entertainment is important. Quality down time helps the body recover and the mind stay focused on the task at hand. So I’ve downloaded the HBO series OZ, as well as the first season of The X-Files. Should be good Tour entertainment for my twisted mind.

My roommate is Ryder again this year, which is perfect for both of us. We understand each other and roll with the same sense of humor. Should be good and I’ll let you know what funny shit he comes up with. I’ll tell you now you should have seen the look on his face when I told him he can’t touch my pillow.

I think my position is understandable when you know that I brought my home pillow to the Tour this year. So far my sleep has been perfect. It’s a bit hard to believe I’ve not traveled with my pillow previously but that’s the truth. I was previously relying on French hotel pillows and its definitely not worked as well as having my own. I’m so pleased by that decision that I told Ryder he’s not even allowed to look at my pillow.
Posted by Recovox at 10:14 AM