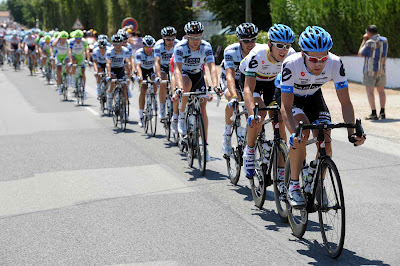 So many miles from France and I still had a most spectacular day yesterday. I’m back home in Los Angeles to see the noted specialist, Dr. Ramin Modabber of the Santa Monica Orthopaedic and Sports Medicine Group. The good doctor is a huge cycling fan, the Chief Medical Officer for the Amgen Tour of California, and for me the perfect person to consult with after my Stage 9 high speed descent ends with me crashing into a guard rail and bouncing my way down a European hillside.

There is, of course, so much beauty to the Tour. I’ll never be jaded enough not to appreciate the pageantry of it all. It’s of course a rolling circus of sorts and the mood and delight that it brings to the French nation and the global cycling community is quite extraordinary. It’s a true privilege to be riding there, but for those of us that don’t make it to Paris there’s also a very real disappointment. I certainly wish I could take that infamous left hand turn over again because I desperately wanted to see Paris this year.

When I replay the events of that day in my mind the scenes are not entirely complete. I hit my head pretty hard or maybe my memory just sucks or maybe I just hit my head pretty hard. I remember being in the front of the peloton. The chase was on. Voices in my ear piece were instructing us to close the gap. We looked around for allies. We could reel some of gap back in on the descent. But the road was slick in spots. I remember seeing it wet then dry then wet again. Ryder was near me. Julian Dean was in front of the group. Thor was behind me. Vino was close by. Now Lotto and Garmin were working together. Two Lotto riders were directly in front of me: Willems and Van Den Broeck. I was on the wheel of Lotto’s, Frederik Willems, I believe. The pace increased. We dropped off the mountain with increasing speed. Surely the gap was coming down. My ear piece echoes with: The gap at 2 minutes. 2 minutes. 2 minutes.

Voeckler’s in the break but certainly we will bring him back now. Suddenly, the left-hander and the eerie sound of screeching brakes, bikes skidding in front of me. I see the Lotto rider in front of me unclip. My mind stops, times freezes. I’m living in slow motion. Around me the horrible grating sound of metal on metal, then exploding carbon. My hands instinctively tighten on the brakes. My breath and heart beat shut down. My eyes are unemotionally fixed on a concrete post directly in front of me. A metal guard rail runs from the post both left and right. I can’t turn. My bike is locked up. The sound of rubber sliding on the pavement washes over me. My front wheel disintegrates into the concrete post. My fork is sawed in half. My hands snap backward as I flip over the top of my handlebars. My head smacks the top of the concrete post as I summersault the guard rail and bounced 20 feet down the embankment. I’m suddenly laying motionless in wooded brush. My hands are numb. My left leg is screaming in pain. I’m afraid to move but I’m alone. I wonder who will see me down here. Does anyone even know what happened? Suddenly a voice blasts over my ear piece: Crash! Crash! Crash!

I took several breaths and slowly willed my body toward the embankment. I was crawling, dragging my left leg. Half way up I hear someone above me. I crane my neck toward the road to see a helmeted motorcycle rider anxiously making his way downward. He lifts me under my arms and helps me back up to the road. Cars, riders and busted bikes are scattered all over. I’m dazed but I think about remounting my back-up bike. I try to stand but I can’t. I simply can’t. To my side is Lotto’s Willem. He looks at me searchingly and asks, “What happened?” I hesitate. It’s too hard to talk. The realization of being out of the race settles over me and I start shivering. Willem again asks, “What happened?” I just shake my head from side to side pausing only briefly to reach up to pull the radio piece from my ear as it crackles: The gap at 7 minutes. 7 minutes. 7 minutes.

An ambulance finally arrives and they load Vino. He’s broken. I watch in dazed detachment. Later he would explain his split second choice as riding off the road or riding up the back of Thor and wiping them both out. I’ll say what you already know, Vino’s a warrior. After what seemed like 45 minutes I’m loaded into a car that takes me back up the mountain we descended down and I’m dropped at a ski patrol station. I’m laid out on a stretcher, cold and pissed. Around me there’s others injured and a lot of commotion about how to get us to the hospital. Finally I get someone’s attention and order a whiskey. Instead of the drink I get a lot of confused looks. I’m nearly ready to pass out from the pain in my leg. Whiskey damn it! Cooperation is not forthcoming. I’m shivering uncontrollably now and growing more angry by the second. Someone hands me a thick under garment from my rain bag that the team left with me. I take it and put it on to warm myself but its the whiskey I really want. I root through the rain pack and pull out my full face baklava and also put it on. I draw a few angry breaths through the small holes covering my mouth and LOUDLY ask again for a whiskey in a way that now sounds more like a demand. Those around me shutter from my volume and my new look but still respond ‘No’ while mumbling to each other that I hit my head. I suspect they are rationalizing my behavior by telling each other its a head injury. Someone excitedly pops in front of me with a glass of water and the French equivalent to Tylenol and fearfully extends it toward me. I slowly lean forward, my eyes moist, my ski-masked head slightly tilted and gently whisper to him, ‘Whiskey? S’il vous plait.’

I’m finally transferred to a local hospital. I sensed they wanted me out. The attending physician reeks of cigarette smoke. How’s that possible? He’s been told I hit my head and he’s certainly been informed about my demands for whiskey. He begins to good-naturedly lecture me on the problems of alcohol. I know I’m not a drinker but he’s not going to be convinced of that so I suggest to him that we make a deal. I stop drinking if he stops smoking. He chuckles, uncommitted. I ask the doctor to think of me every time he lights up. He smiles and continues his examination.

I’m required to spend the night. Head injury. I’m not convinced of that but I have no chance to convince them that this is really just the way I am. My leg’s in a brace and on my lap is my trusty iPad. My body has shut down but I couldn’t relax. I’m restless, irritable and alone. Of course I feel lucky as well. News of broken bones and more serious injuries filter into my room. Emails come from my teammates and friends. I console myself by reading their words, sometimes more than once. Thor, Tommy D and Julian Dean are especially kind and supportive. I’m out of the Tour but I’m okay. It could have been much worse and they remind me of this fact. And while I’m worried about my hand and knee I’m also grateful that fate cleared a more gentle path for me than maybe some of the others. To see what happened to Flecha and Hoogerland later on that same stage was both sobering and horrifying.

Strangely, the days events made it so I was unable to sleep. Looking to calm myself and find a diversion I pull up the HBO crime drama OZ on my iPad and lay in bed watching the entire 3rd season. I finally pass out between 2 and 3am hopeful for an early morning pick-up by the team. At 8am I’m ready to go but my ride doesn’t show up till a few hours later. I’m transferred to the Rest Day hotel in Saint Flour, I believe. It was good to see the guys again but it would also be bittersweet as this would be my last night with them. I gently settled into my room with Ryder, my knee badly swollen, and began making plans to get back to the US. I would need to see a specialist back home.

Yesterday, Dr. Modabber kindly cleared time to see me. He x-rayed my hand and wrist and confirmed that I did not fracture any bones. He convinced his MRI tech to skip lunch to scan my knee. The pre-scan evaluation and diagnosis was not good. The possibility of a meniscal tear was high. We spoke about the required surgery and maybe removing the 3 screws that have been in my knee since my 2003 accident. But to our delight the scan showed no tear just a ‘femoral contusion’ from the impact. ‘If you can deal with the pain you can spin’ was what I was told. No climbing. No strenuous efforts. I left the doctor’s office elated and headed immediately over to one of my favorite vegan restaurants, Native Foods. To my surprise on the restaurant wall hung the framed Wall Street Journal article about the first cyclist to attempt the Tour de France on a vegan diet. In the background Lynyrd Skynrd’s ‘Freebird’ played. I couldn’t help but smile, life was offering me another special moment.

When I got back home I slipped into my gear and slow-pedaled around the lake near my house. My knee hurt, my right hand still had pain and numbness, but I was pedaling. I’m not in France with my teammates but I was pedaling. And after a brilliant and crazy 9 stages of the Tour, I was pedaling again. When I returned to the house my 3 year old boy, Waylon, was on the driveway. I lifted him onto my bike and we pedaled off together, in my head the lyrics of ‘Freebird’ playing softly.

For more on DZ please click on the title link to go to http://davezabriskie.com/
Posted by Recovox at 7:28 PM