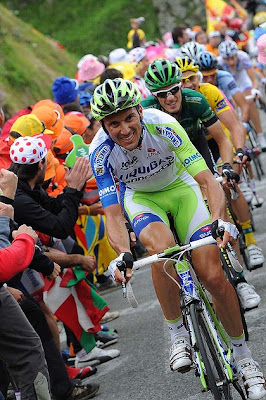 As the Tour de France peloton embarks on the final stage in the Pyrenees tonight, Italian Ivan Basso knows he will no longer be able to hide behind the uncertainty of his form following his brilliant ride in the 12th stage from Cugnaux to Luz-Ardiden on Thursday.

Two days before his fourth place, 30 seconds behind Spaniard Samuel Sanchez (Euskaltel-Euskadi) in the 211-kilometre stage, Basso told The Saturday Age that the lack of attention on him compared to the other favourites was not a concern. But Basso stepped out of the shadows in Thursday's first taste of the Pyrenees with a splendid ride, especially on the final 13.5-kilometre climb to the finish. His Polish teammate Sylwester Szmyd was also impressive. Four kilometres into that final climb up to Luz-Ardiden, Szmyd set the tempo on the front of the group of contenders.

What got tongues wagging was the sight of Basso, last year's Giro d'Italia winner who had served an 18-month ban for admitting intent to dope, riding on Szmyd's wheel, and then in front of Australian Cadel Evans (BMC) and Luxembourg's Andy Schleck (Leopard Trek) to take fourth behind Sanchez.

The Italian said: ''I am very content. It was an important first test for me … especially after my crash on Mount Etna [while training in May].

''Szmyd rode great today to help pace me over the Tourmalet and keep me in the group until the final part of the stage … I have to stay concentrated and remain calm. There is still lots of racing in this tour. This was only the tour's 'antipasto' [appetiser].''

As Basso was elevated from 11th to fifth overall, three minutes and 16 seconds behind French race leader Thomas Voeckler (Europcar), the big question was whether the disappointing eighth-place finish by three-time tour winner Alberto Contador, 43 seconds behind Sanchez, was evidence that he simply isn't up to winning the tour again. But Basso warned against ruling out the Spaniard, who won the Giro d'Italia in May.

''Alberto has had a lot of problems in this tour, with crashes and other difficulties,'' Basso said. ''And do not forget the efforts of the Giro. I was beat after winning the Giro last year. But no one should underestimate him. He is sure to be a force to be reckoned with in this tour.''

Contador, a mentally tough athlete who is carrying a knee injury sustained last week, set out to turn Thursday's result into a positive, even though it also highlighted the threat that the Schleck brothers - Andy and Frank - pose.

''We have seen from the beginning of the tour that the Schleck brothers were to play two cards and they would take turns attacking,'' Contador said. ''Perhaps I spent more energy than necessary and my knee has bothered me a bit but I'm happy with the outcome of this first mountain stage''.
Posted by Recovox at 5:58 PM

Using Car Rental 8 you can find the most affordable rental cars at over 50000 locations across the globe.