Ivan Basso: “We’ve only had one off day” 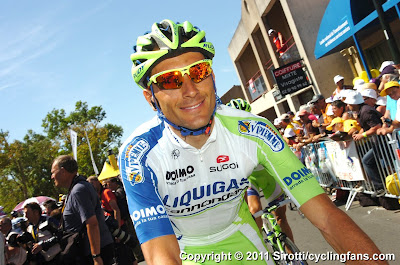 Ivan Basso (Liquigas-Cannondale) has staked his season on a strong performance in the Tour de France. The 2010 Giro d’Italia winner missed out on defending his title in his home tour to be fresh in July and, so far, the gamble appears to be paying off.

The 33-year-old from Gallarate, south of Varese, is currently in eleventh place, 3’36” behind new race leader Thomas Voeckler (Europcar), but within a minute of most of is rivals in the race for yellow jersey

“If they’d asked me to finish the first week of a race like this with a gap of a few seconds, a race full of mixed stages and finishes that didn’t really suit me, I’d have leapt at the chance,” he said. “We’ve only had one off day, the day of the team time trial, but apart from that we’ve proved we’re up to the challenge in the other stages.”

Liquigas-Cannondale finished 57 seconds behind team time trial winner Garmin-Cervélo on stage two, meaning Basso lost 53 seconds to BMC Racing’s Cadel Evans, the best of the genuine contenders. Other than that, Basso has lost just a handful of seconds on the three uphill finishes, and goes into the second week just 1’10” behind the Australian.

While the green and blue team has looked after Basso well in the tough, stressful first week, the Italian has been lucky in that he has avoided all of the crashes that have seen the abandon of Bradley Wiggins (Team Sky), Alexandre Vinokourov (Astana), Jurgen Van Den Broeck (Omega Pharma-Lotto) and others. This luck has been assisted though, by the Italian deliberately keeping out of trouble.

“My teammates have shown great character and also strength as they’ve protected me every day,” he said. “Naturally I thank them for that. As for me, I’ve been lucky so far as I haven’t been involved in any crashes. But I think that my customary caution has also worked in my favour. I’m not into running risks and sometimes I use up a bit more in terms of energy than my opponents.

“I’d rather waste some energy than throw away the chance to win the Tour,” he explained. “I know my strength; I’m a strong climber so I’ll focus on that to make the difference.”

With the first week out of the way, the Tour’s first big rendezvous will be on Thursday, when the stage finishes at Luz-Ardiden.

“The battle for the different classifications will calm down,” he explained, “starting with the GC: Voeckler is an expert rider and he’ll be trying to hang on to the yellow jersey for as long as possible.

“But then the gloves will come off on Thursday. We’ve haven’t seen anything yet really. Lots of riders have been saving themselves as they’re well aware of the climbs we’ve got to face.”

While he feels ready for the challenges, he can’t say how his rivals are feeling.

“I can’t say how they’re doing because the routes weren’t selective,” he said. “Evans is the one who’s shown that he’s most in form, even though the routes suited him. If he keeps this up in the Pyrenees and the Alps, I’d say he’s the favourite.

“We haven’t seen much of Andy Schleck but he’s doing well,” he continued. “Him and Fränk are the only ones who can create superiority in numbers. Sanchez has stayed under the radar but I thought he looked brilliant. Contador? He’s the strongest and the one to fear on the climbs. I wouldn’t rule out a podium place for Klöden and Gesink though: they’ve got what it takes to make up time.

“Having said that though, my first thought is my personal performance,” he added. “I’m calm and motivated, and know I can make my mark. If someone proves that they’re stronger than me at the end, well chapeau to him. I definitely won’t be holding anything back."
Posted by Recovox at 11:52 PM