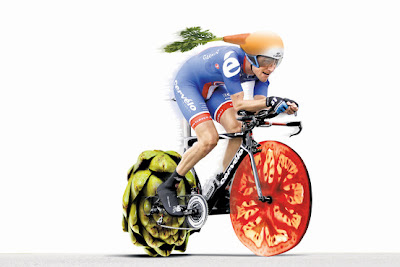 American David Zabriskie Aims to Compete in the World's Most Grueling Bike Race—As a Vegan!

To climb the Tour de France's steep mountain passes and cross its scorching plains, cyclists have tried stuffing themselves full of steak and pasta, gulping down wine and cognac, smoking cigarettes, taking amphetamines and, of course, using other drugs during the race's 107-year history. On Saturday, American David Zabriskie plans to try something entirely new: Riding the Tour on a vegan diet.

Experts say he is the first cyclist to attempt the most difficult bike race in the world sans meat, dairy or eggs. (He will cheat slightly, he says, because he plans to eat small amounts of salmon two days per week to increase iron absorption).

Cyclists in the Tour de France can burn 8,000 calories a day—so many that some riders, already lean from their training, are unable to eat enough food to keep up with calorie loss.

The conventional wisdom is that eating plenty of meat and dairy provides protein to help cyclists' muscles recover, and that the iron in red meat keeps the body producing ample amounts of hemoglobin, part of the all-important red blood cells that transport oxygen to the muscles. Iñigo San Millán, a sports-medicine professor at the University of Colorado and a former physiologist on Zabriskie's team, calls the cyclist's desire to go vegan "a strange concept." To many cyclists, he says, a vegan diet "doesn't make much sense."

Before last season, Zabriskie, who rides for the U.S.-based Garmin-Cervélo team, was a typical meat-eating athlete, scarfing down whatever he wanted so long as it didn't make him fat. But at the beginning of last season, his team's chiropractor gave him a blood test that screened his sensitivity to certain types of foods. The chiropractor, Matt Rabin, told Zabriskie he had the highest sensitivity to food on the team. Another blood test showed Zabriskie had the highest inflammation of his muscles.

During last year's Tour de France, Zabriskie turned down the red meat being passed around the dinner table because he thought it required too much energy to digest. In the late summer of last year, he began phasing out all meat from his diet and by October, he had also cut out dairy.

After nine months on the diet, Zabriskie says he's feeling better than ever. He has had some of the best results of his career and says he feels more focused. "I think a lot of people see food in terms of whether it's going to make them fat or make them skinny," he says. "I'm seeing food in terms of how it's going to make me think and will it give me clarity." Zabriskie says he's noticed that even small ailments, like canker sores and a persistent rash he used to get, have all gone away. Even his vision has improved, he says.

This winter, Zabriskie's team director, Jonathan Vaughters, caught wind of his new diet and gave him a call. Vaughters was concerned the diet would lower Zabriskie's iron intake, which is crucial for endurance athletes. He told Zabriskie that he could try the diet, so long as he took regular blood tests to monitor his level of ferritin, the protein that stores iron. He said Zabriskie should eat more dark, leafy greens and other sources of iron. Vaughters says he's fine with the diet, so long as the results are good. "At the end of the day, I just want him to go fast."

Vaughters says he was surprised when blood tests early this season showed Zabriskie's ferritin levels had remained stable on the vegan diet—which means his hemoglobin and red blood cell counts also remained normal. He says he's been pleasantly surprised by his performance. "He's won more time trials this year than he has in his career," Vaughters says. "The proof is in the pudding."

To get guidance on the diet, Zabriskie consulted with Brendan Brazier, a triathlete and author of "The Thrive Diet," a guide to vegan diets in sports that has become something of a bible for the cyclist. Brazier lives near Zabriskie in the outskirts of Los Angeles and began joining him on rides.

Earlier this season, Zabriskie said his energy levels were down and he felt weak. He wasn't sure if it was a result of the diet or a recent bug he was getting over. He got in touch with Brazier, who advised him to take vegan protein shakes made from hemp seeds, flax seeds and brown rice protein, among other ingredients. (Brazier invented the shake and markets them under the "Vega" brand). Zabriskie says he now drinks three or four of the shakes throughout the day.

Zabriskie also consulted with a professional motorcycle racer, Ben Bostrom, also a vegan, who advised Zabriskie to include small amounts of fish a couple of times a week because of the incredibly large load he puts on his body during training. "He told me, don't get too hung up on the word 'vegan'," says Zabriskie. The fish, Zabriskie says, helps his body absorb certain vitamins and iron.

During the Tour of California in May, Zabriskie won the time trial. Last month, he blew away the competition at the U.S. national time trial championships in Greenville, S.C. That victory, he says, reinforced his decision to change his diet. "I knew I had done everything right," he says.

Zabriskie is not a contender for the yellow jersey. He has raced in the Tour de France five times and finished it three times. He became the third American to wear the race's coveted yellow jersey in 2005 when he beat Lance Armstrong in the race's opening prologue. This year, if he just finishes, he could become a hero for advocates of the Vegan diet—at least those who don't mind the fish.

Vaughters says it might change the way professional athletes view veganism. "This is definitely the ultimate test of the vegan diet," he says. "If it works here, no one can ever say you can't do X,Y,Z as a vegan."

Here's what the cyclist plans to eat on race days during the Tour.

On the Bus, Post-Race:

Fresh fruit and a vegan protein shake before bed
Posted by Recovox at 2:58 PM

eToro is the ultimate forex broker for rookie and pro traders.