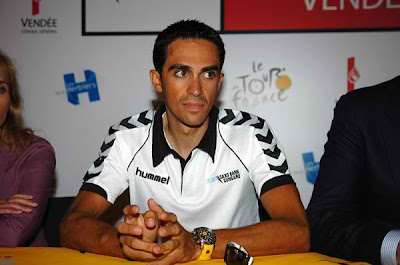 Alberto Contador was forced on the defensive during his pre-race Tour de France press conference after being quizzed about his still-undecided doping case from the 2010 Tour de France and his stance against doping.

In a packed room at the media centre in Le Herbiers, Sunday Times journalist and former professional Paul Kimmage lead the string of questions. He suggested that every team Contador has ever raced with has been implicated or associated with doping. He suggested Contador would be racing under a cloud at this year’s Tour de France.

“My tolerance against doping is 100 percent but everyone can believe what they want,” he said bluntly.

He dismissed the idea that he could win the Tour de France and then be suspended and so lose his victory just a few weeks later.

“There always a lot of pressure at the Tour, you can see that by the number of journalists here. The outside pressure is greater than the inside pressure. I’m able to stay focused and know that my objective is to enjoy riding my bike.

Bjarne Riis tried to defend Contador, insisting that people should question the drawn out procedure that has resulted in him starting the 2011 Tour de France, while still not knowing if he will be banned for testing positive during the 2010 race.

“I beg you all to understand. If you don’t agree that Alberto is riding, you should question the system and not so much us or him,” Riis said.

“I was pretty sure there would be lot of questions about Alberto riding the Tour de France. We’ve had questions the whole year and will come again and again. The answer is the same as always: everybody would love to have had a solution a while ago, before the Tour, but that hasn’t happened. Unfortunately that’s the way it is. That’s the rules we have to respect, we can’t do anything about it.

"The system works like that. We have to respect the system as it is. Alberto was cleared by the system, and has all his rights to ride. As long as he is cleared we will continue to support him and that’s also the reason why he is starting in this Tour. I don’t see why he should be punished or suspended when cleared. I don’t think it’s fair so that’s also why he is here. “

Not a perfect race route

Contador was asked some questions about the Tour's route and admitted he wasn't sure how he'll fare following a hard Giro d'Italia.

“This is the first time I’ve done both races together. It’s not like riding the Giro and the Vuelta in 2008,” he said.

“Of course it creates doubts in your mind and the Tour is very unforgiving and you do not know how your body will respond. It was a very hard Giro this year. It’s difficult to say how I’ll perform over three weeks.

“I think it’ll all depend on how the race goes and how my legs are. We’ll see how strong I am in the Pyrenees.”

Contador refuted the idea that this year’s race route was perfect for him. He picked Andy Schleck as his number one rival but not his only one.

“It’s not the best route for me. I’d prefer a 15-30km time trial and then another 30km one. The mountains suit me but in 2007 there were 120km of time trials and that suited me better,” he said. “If I have to name my biggest rival, I’d say Andy Schleck. But there are a lot of other experienced riders who could do well and young riders fighting for victory too.”

Riis tried to be more optimistic than his team leader. “Alberto is ready after doing a hard Giro,” he said.

“He’s seen different stages of the Tour and is ready for this. He’s motivated. Alberto is uncertain of his condition after the Giro but I’m not that scared. I think I know what he can do. If he’s recovered well I think we’ll see him amongst the best.

“The main challenger will be Andy Schleck but there will be other guys that we have to pay attention to. There are seven, eight or nine riders with have a chance to get on the podium.”
Posted by Recovox at 7:54 AM