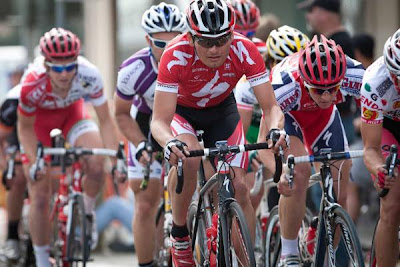 Freddie Rodriguez has joined the US-based UCI Continental Team Exergy and will take to the starting line at the TD Bank Philadelphia International Cycling Championship on Sunday. The decorated sprinter will captain his new outfit during the one-day classic and is confident that his own fitness will carry through to a strong performance.

"I had kept my eye on Team Exergy, the team, riders, message and where they want to go in the future,” Rodriguez said. “I wanted a team that can use someone like myself to mentor the riders and help them grow and that I can continue to grow with. We decided that this was a good time to come on board. My fitness is up to the point where I feel like I am competitive.”

Rodriguez, 37, was born in Bogotá, Colombia and now resides with his family in Berkeley, California. He is a notable sprinter having raced for international teams Mapei, Domo-Farm Frites, Acqua e Sapone and Predictor-Lotto throughout his career.

“Freddie will fill many roles this year but we are most excited about the wealth of knowledge and experience he can share with our riders,” said Team Exergy partner Remi McManus. “Freddie is the most decorated cyclist racing in the US peloton and we are thrilled to have him.”

Rodriguez will debut for Team Exergy at a race with which he's very familiar, the TD Bank International Cycling championship, an event that doubled as the USPro Championships through 2005 whereby the first American to cross the line won the national title. Rodriguez won the stars and stripes jersey on three occasions in 2000, 2001 and 2004.

“I have high ambitions for this weekend,” Rodriguez said. “I have come into this race and have either won or been on the podium in the past. I think I’ve been on the podium at least five, maybe seven, times. I feel good, my testing and power files are up to par. My only weakness is the lack of high-end racing. The motivation is there and this is a good start because it is a race that I really love.”

He competed under the now defunct Rock Racing team for two seasons, in 2008 and 2009. He spent last season and much of this year competing for the local team Specialized Racing that is linked to his Fast Freddie Rodriguez Foundation. He placed sixth at the Merco Cycling Classic Downtown Grand Prix in March and contested several other California-based events this spring.

“Last March I was left without a team when Rock Racing folded and I was building a house and had a new born, so we had a lot going on,” Rodriguez said. “I decided it was better to concentrate on my family and get everyone situated. I spent that year launching my own clothing company [Prooff] and the Fast Freddie Foundation so we teamed up with Team Specialized development and work with kids.”

"These additions were yet another step toward building the best possible team for the future,” McManus said. “I think I speak for all us when I say we are very excited to bring Freddie and the Gingers into the fold. These guys are not only good racers they have ties to their communities and charities, which is a very important aspect within our team."
Posted by Recovox at 3:25 PM