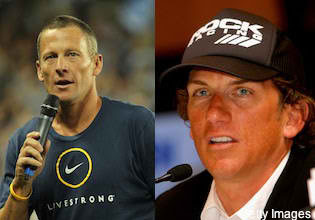 Cyclist Tyler Hamilton's lawyer says he notified federal authorities about the Olympic gold medalist's awkward reunion with his former teammate Lance Armstrong in an upscale Aspen bistro over the weekend, saying the run-in may have constituted witness tampering.

Attorney Chris Manderson said he believes the staff of Cache Cache may have notified Armstrong after Hamilton and his party arrived at the French restaurant for dinner on Saturday night.

"I don't believe this was a chance encounter," Manderson said. "It was well-publicized that Tyler would be in Aspen for the weekend."

Hamilton testified last year before a grand jury investigating Armstrong and other cyclists accused of using performance-enhancing drugs. He accused the seven-time Tour de France winner of using banned substances - and acknowledged his own drug use - during a May 22 interview with "60 Minutes."

Hamilton, in Aspen for an event sponsored by Outside magazine, was pushing his way through the bar area at Cache Cache when somebody stiff-armed him, Manderson said. The person blocking his path turned out to be Armstrong, Hamilton's former teammate with the U.S. Postal Service team.

Hamilton asked Armstrong to continue the discussion in private, Manderson said, but Armstrong refused to leave the bar and continued to berate him.

Cache Cache owner Jodi Larner, a friend of Armstrong's, denied there was any confrontation. She said she was at the bar with Armstrong when Hamilton walked by, and she did not see Armstrong act in a confrontational manner. Armstrong greeted Hamilton, she said, and Hamilton tried to hug Armstrong - a move Armstrong gently rebuffed. "There was no drama," she said.

Armstrong attorney Mark Fabiani told the Daily News that Hamilton and his friends pulled up in front of Armstrong's Aspen home on Sunday. The group did not approach the house but instead stood on the street, taking pictures and speaking loudly. Armstrong was not at home at the time.

"It shows how obsessed Hamilton is with Lance," Fabiani said.

"Fabiani's allegation is utter horse----," Manderson said. "His client threatened a witness in a federal investigation, and he just wants to spin some farcical conspiracy theory? This idiotic allegation has less credibility than the infamous Iraqi information minister (Tarik Aziz)."
Posted by Recovox at 11:24 PM