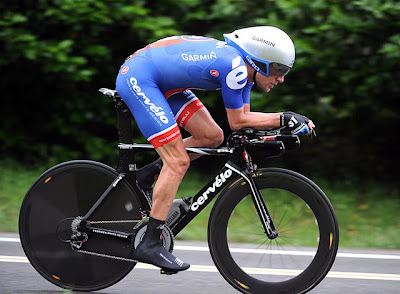 First of all Congratulations to Wiggins. It was an extremely hard version of the Dauphine this year and he pulled out the big W.

From the start I had to wonder who’s in charge of logistics? It took quite awhile to get to the hotel and we were staying on top of the mountain where the last stage would finish. It was a bit of a pain logistically to drive down a 20km mountain for the prolog in the morning but that’s what we do. It was also kind of restless sleep up there at altitude. Too much tossing and turning for me and not the more restful sleep that I need.

I was the first to go from the team because the directer was thinking the weather would be bad in the afternoon. Well the whole day was kind of a crap shoot and the weather was the best for the last guys. My corners were a little wet and I was not eager to go down. I also didn’t have the best warm up routine as everyone seemed a little off their game that early in the morning, like my bike being taken for UCI measurements when I needed to be warming up on it. Oh well, that’s the game, dealing with little things like that. In the end I was off the pace, a little too explosive for me. The truth is I’m more of a long TT guy.

The next few days went ok. I’ve been testing a new climbing technique that is really helping me stay up there on the longer climbs. We had Tyler in there for the sprint day on the 4th stage and I got up there and pulled a particularly fast train to bring the break back in the end, which felt pretty good. I really don’t think I’ve felt this healthy in a long time.

The last 3 days were the hardest of the race and the attacks were nonstop for 100km from the start. I remember on one day when things finally settled down I was on one of those verbal rolls that most of the guys in the peloton appreciate. I really don’t remember what I said or did but that fact remains that I can usually take the edge off of the moment with a sharp observation, a good-natured but nonetheless mocking imitation, or by blurting something out that’s so random, so ‘out there,’ so insanely funny that I’ve even cracked myself up from time to time. On this one day either something got lost in translation or the Rabobank rider Carlos Barredo thought my humor was directed at him, which it was not. His stare and stern look were boring a hole in me and I really didn’t want him to take a swing or try to whack me with a wheel. I quickly settled him down when I delivered this line with all the seriousness I could muster: “it’s all cool man, they gave me a special license which allows me to make fun of everybody here.” He laughed. I laughed. We all laughed.

It was a good productive week for me. I’m enjoying the racing more than ever before. The body feels good, the mind is at rest, and importantly, it appears I haven’t lost my sense of humor.

I’m back again in Girona. This morning I’ve been reunited with my family and it’s my wife’s birthday. The cake will be small, at least for me, but the celebration will be real. The family are all sleeping now, having just arrived they’re battling a bit of jet lag. Awake or not, I’m just happy that they are here and we’re together.

Till next time it’s DZ checking out with a smile on his face.