Are We Built to Run Barefoot? 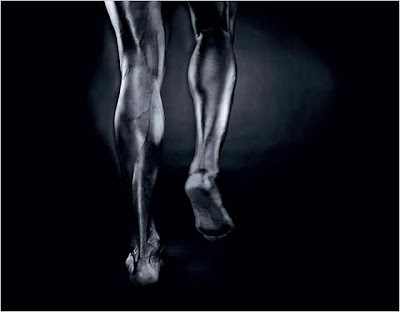 At a recent symposium of the American College of Sports Medicine’s annual meeting in Denver, cutely titled “Barefoot Running: So Easy, a Caveman Did It!,” a standing-room-only crowd waited expectantly as a slide flashed up posing this question: Does barefoot running increase or decrease skeletal injury risk?

“The answer,” said Dr. Stuart J. Warden, an associate professor of physical therapy at Indiana University, “is that it probably does both.”

Barefoot running remains as popular and contentious a topic among exercise scientists as it is among athletes, even though it is practiced by only a tiny subset of American runners. These early-adopter runners, however, tend to be disproportionately enthusiastic and evangelical. Many cite the best seller “Born to Run,” by Christopher McDougall, which touts barefoot running, and claim that barefoot running cured them of various running-related injuries and will do so for their fellow athletes. “There are people who are convinced that barefoot runners never get injured,” said Daniel E. Lieberman, a professor of human evolutionary biology at Harvard who runs barefoot himself and spoke on the topic during last week’s symposium.

But in the past year, anecdotal evidence has mounted that some runners, after kicking off their shoes, have wound up hobbled by newly acquired injuries. These maladies, instead of being prevented by barefoot running, seem to have been induced by it.

So what really happens to a modern runner when he or she trains without shoes or in the lightweight, amusingly named “barefoot running shoes” that are designed to mimic the experience of running with naked feet? That question, although pressing, cannot, as the newest science makes clear, easily be answered.

Most of us, after all, grew up wearing shoes. Shoes alter how we move. An interesting review article published this year in The Journal of Foot and Ankle Research found that if you put young children in shoes, their steps become longer than when they are barefoot, and they land with more force on their heels.

Similarly, when Dr. Lieberman traveled recently to Kenya for a study published last year in Nature, he found that Kenyan schoolchildren who lived in the city and habitually wore shoes ran differently from those who lived in the country and were almost always barefoot. Asked to run over a force platform that measured how their feet struck the ground, a majority of the urban youngsters landed on their heels and generated significant ground reaction forces or, in layman’s terms, pounding. The barefoot runners typically landed closer to the front of their feet and lightly, without generating as much apparent force.

Based on such findings, it would seem as if running barefoot should certainly be better for the body, because less pounding should mean less wear and tear. But there are problems with that theory. The first is that the body stubbornly clings to what it knows. Just taking off your shoes does not mean you’ll immediately attain proper barefoot running form, Dr. Lieberman told me. Many newbie barefoot runners continue to stride as if they were in shoes, landing heavily on their heels.

The result can be an uptick in the forces moving through the leg, Dr. Warren pointed out, since you’re creating as much force with each stride as before, but no longer have the cushioning of the shoe to help dissipate it. Most barefoot runners eventually adjust their stride, he and the other presenters agreed, landing closer to the front of their feet — since landing hard on a bare heel hurts — but in the interim, he said, “barefoot running might increase injury risk.”

Even when a barefoot runner has developed what would seem to be ideal form, the force generated may be unfamiliar to the body and potentially injurious, as another study presented at last week’s conference suggests. For the study, conducted at the Biomechanics Laboratory at the University of Massachusetts, runners strode across a force plate, deliberately landing either on the forefoot or on the heel. When heel striking, the volunteers generated the expected thudding ground reaction forces; when they landed near the front of the foot, the force was still there, though it generally had a lower frequency, or hertz.

Earlier research has shown that high-frequency forces tend to move up the body through a person’s bones. Lower-frequency forces typically move through muscles and soft tissue. So shifting to a forefoot running style, as people do when running barefoot, may lessen your risk for a stress fracture, and up your chances of developing a muscle strain or tendinitis.

So where does all of this new science leave the runner who’s been considering whether to ditch the shoes? The “evidence is not concrete for or against barefoot or shod running,” said Allison H. Gruber, a doctoral candidate at the University of Massachusetts and lead author of the hertz study. “If one is not experiencing any injuries, it is probably best to not change what you’re doing.”

On the other hand, if you do have a history of running-related injuries or simply want to see what it feels like to run as most humans have over the millenniums, then “start slowly,” said Dr. Lieberman. Remove your shoes for the last mile of your usual run and ease into barefoot running over a period of weeks, he suggests, and take care to scan the pavement or wear barefoot running shoes or inexpensive moccasins to prevent lacerations.

And pay attention to form. “Don’t overstride,” he said. Your stride should be shorter when you are running barefoot than when you are in shoes. “Don’t lean forward. Land lightly.”

On this point, he and all of the scientists agree. Humans may have been built to run barefoot, “but we did not evolve to run barefoot with bad form.”
Posted by Recovox at 7:20 AM

Of course we are! Running barefoot is already in our blood because our ancestors once run barefoot to hunt and to compete with one another. You can visit invisibleshoe.com for info on how to make a modern huaraches sandals.

Need To Boost Your ClickBank Traffic And Commissions?