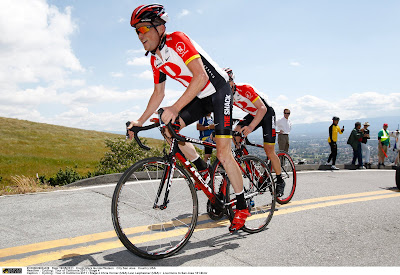 The nine riders are:

“It was hard to make the selection of these nine riders," said Johan Bruyneel. “After the injury of Sébastien Rosseler, we still had a pre-selection of 14 riders. In the end we can say that the complete 2011 Tour roster has been chosen based on the strongest team from both a sportive and experience criteria.

"With Brajkovic, Horner, Klöden and Leipheimer we will start with four guys who will be able to contend for the general classification," continued the Director of nine Tour de France wins. “Jani Brajkovic beat Alberto Contador in last year's Critérium du Dauphiné. At age 39 Chris Horner dominated the Tour of California and proves to get better with the years. Andreas Klöden has had a healthy and strong season so far, winning the Vuelta al Pais Vasco and finishing as runner-up in Paris-Nice. And then Levi...he was so impressive in Switzerland; he is ready. Too many leaders is not an ideal situation, but we are confident we can turn this into an advantage. Together we are strong to fight against Contador and the Schlecks. Moreover, after the first decisive stages you already have a very good idea on the tactics to follow. We proved in the past that Team RadioShack is a real Team. All riders sacrifice themselves with pleasure for the common goal. Team RadioShack is not a mixture of individuals.

"The hardest part has been to disappoint some non-selected riders. It is obvious that we will tackle this 2011 Tour de France with podium contenders. We are aware we won't win mass sprints this Tour but we decided that a good GC will be worth it and we make it our main goal in this Tour."

"As we do every year, the Directors and I carefully evaluate all the riders in contention. It’s never an easy decision for us to make, but in the end, we feel confident that the chosen riders will help us achieve our goals for the 2011 Tour de France.”
Posted by Recovox at 2:26 PM