Dave Z - Greenville and the Random Thoughts of an Amused Cyclist 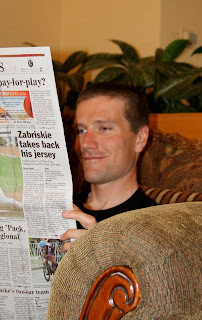 Get me to Greenville
My flight from LA was early last Thursday and my routing was through Atlanta. My plane was significantly delayed in Atlanta and I would not arrive into Greenville, home of the 2011 US National Championships, until 2am Friday morning. As a result I felt wiped and would get to sleep early Friday night and wouldn’t wake until 9am Saturday morning. That late wake up startled me but the added rest was necessary for the mission I was on.

You cannot win alone
I’m an old pro and I’ve known this truth a long time. I would need some service support in Greenville but our service trailer and mechanics were in California after the Amgen Tour of Cali. They hurriedly packed and left Sunday night after the final stage in Thousand Oaks. After a tough week of service in California for these unsung heroes who support the riders things were about to get worse, as they made their way east across the country and into the mouth of some crazy weather. Eric, from our continental team’s service staff was doing me a huge favor by pledging to be in Greenville to support my efforts in Saturday’s TT championships. Eric (and his uncle) braved lightning storms, tornadoes, and enough bad weather to turn the meek back around, but he soldiered on toward South Carolina seeking shelter along the way and doing his best to stay out of harm’s way. I think it was a relief for both of us when we eventually met again 5 days later in Greenville.

Besides Eric, I needed to find additional team support for an event that was not really for the team. I was more than fortunate that one of our crack assistants, Alyssa, would be willing to join me in Greenville. She would act as my physio, help me with my arrangements and help take the stress out of what would be a very stressful day. A huge thank you to both of them.

Pre-race Routine
Everyone’s routine is their own. There are some general rules but each rider tweaks their pre-race routine to best suit their body. My warm up in Greenville was mild, the weather was getting warmer and riding second to last I knew I’d be in the heat of the day. I wanted to ‘open up’ but I didn’t want to over heat. I stayed in the shade, primed myself on the trainer, and then when I entered the starting area I intentionally did a few swinging leg stretches in which I raise my leg as high in front of me as possible. When my foot goes above my head the startled look on the other riders is priceless, as high reaching leg swings are not one of the general rules.

Three Laps
I felt like I rode the perfect race. I heard Zirbel’s first lap time before I left the chute so I had a good gauge on what the number was to beat. I zoned in immediately, my head was in it and I bore down throughout the 6.9 mile course, which we would circle three times.

Bostrom
On my third and last lap of the course I suddenly had philosopher, cyclist and motocross racer extraordinaire Ben Bostrom’s words in my head. On training rides together Ben is fond of saying, ‘we’ve got a long way to go but only a short time to get there.’ His words were added inspiration on my final lap as I dug deeper to make the ride just a little bit shorter.

Podium Girls
To avoid the occupational hazards of the job by running off stage after the champagne has been passed out is completely unacceptable. Part of the extended joy of beating the field is the opportunity for mild abuse of the podium girls. Following the premeditated antics of the podium girls in Greenville I’ve been in touch with the USA Cycling and I believe substantial fines are forthcoming.

Taylor Phinney
The kid is special and he’s been a worthy national champ for the past year. He has a bright future and is a special talent. He’s also been a great motivator for me (as I suspect I’ve been for him).

Tejay van Garderen
I consider him a friend. He started 1 minute ahead of me on the TT course and may have been just a bit surprised when I passed him on the second lap. I saw him at the hotel afterward and he flipped me off, and then smiled. I think the smile means we’re still friends.

Dave Towle
I heard afterward that Dave Towle, the race announcer, told the audience watching the TT Championships that my 6th national title is a record that would likely stand for a very long time. ‘Check back with me in 20 years and let’s see if anyone’s even close,’ is how I believe he put it. Let’s hope Dave is psychic.

6
I’ve heard from an incredibly reliable source that 5 is crazy jealous, but I don’t really give a damn.

Hangover 2
I loved the first film and was anxious to see the 2nd. I went to see the film Saturday night with some friends as part of our celebratory evening and we laughed our asses off. Am I completely out of my mind when I say sign me up for a race in Thailand? And the monkey’s on my team.

Thai Food
Ok, Bangkok is likely a long way off for me so my friends and I settled on Greenville’s best Thai restaurant, Lemongrass. The owner came to our table remembering me from 2009 when our team also had a meal at her restaurant. A slight, kind and gracious woman who knows little about cycling, was unimpressed by my wins that year or this, but remembers well how cool our après cycling gear was in ’09 and with tilted head seriously questioned my less styled look this year.

The Underground
If you find yourself in Greenville don’t hesitate to visit one of the cooler coffee shops I’ve ever had the pleasure of being in. They call it The Underground because it’s in the basement of a corner building. Modest but hip, understated but comfortable, with a staff well-versed in friendly southern hospitality, you’ll find good coffee and just the right vibe, especially for this unrecognized connoisseur of the black bean.

Happy Birthday Son
In Solvang it was a fun moment for me to bring my son Waylon up on the podium. I won the time trial at the Amgen Tour of California and he was celebrating on the podium with me. But my family couldn’t make the trip to Greenville as Waylon was ill. I really wanted him there with me as it would be his 3rd birthday on the weekend of our national championships and I would head immediately afterward to Spain. I think I made the best of it when I passed my championship medal to a friend and asked him to bring it back home for me and to place it around my son’s neck and to tell him I said, ‘Happy Birthday’.

California
I’ve got only one thing to say to that golden state now that I’m back in Girona: California, you better be there when I get back.
Posted by Recovox at 10:58 AM