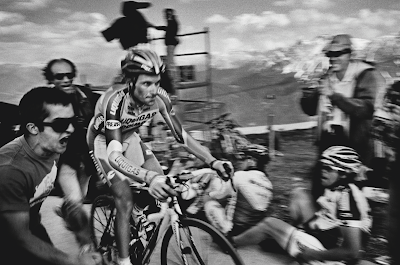 Ivan Basso (Liquigas) will be racing again at the Dauphiné, starting with the 5.4-km flat prologue in Saint-Jean-de-Maurienne on Sunday. It will be the first time the Italian has put a race number on his back since the Tour de Romandie, one month ago. He’s still on the road to recovery since he crashed in training in Sicily on May 17.

“I’m still in the process of recovering from my crash,” Basso said. “It’s been a real halt in my preparation for the Tour de France. I’ve resumed training slowly. I’ve been struggling quite a lot since. I’m getting better but my form is far behind where I wanted to be.”

At the Dauphiné, Basso will race against riders who have made the top ten of the Giro d’Italia and who will want to capitalize on their current form, like Joaquim Rodriguez (5th) and Kanstantsin Sivtsov (10th). Among the GC contenders of the Tour de France, hot favourites for the Alpine race are Cadel Evans, Samuel Sanchez, Robert Gesink, Tony Martin, Jurgen Van den Broeck, Bradley Wiggins, Alexandre Vinokourov and defending champion Janez Brajkovic.

“I wouldn’t say that my ambitions for the Dauphiné are limited, they are non existent,” Basso made clear.

“I’m coming to look for the right race rhythm for the Tour de France. This is an important week for me. I won’t be able to deliver results but I’ve looked at the course of the Dauphiné and the number of uphill stage finishes will help to make the efforts I need right now. It’ll give me a first indication on what my shape is like at the moment. The sensations will be far more important than the results. I have one month to find the right rhythm and present myself on the start line of the Tour de France with the ideal condition.”
Posted by Recovox at 11:43 AM