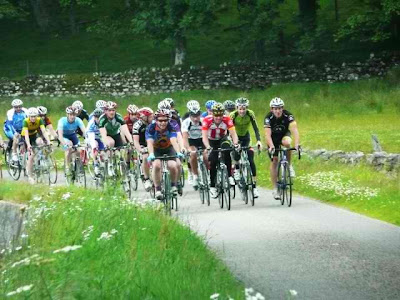 On an at times damp day in Sutherland - one of the most sparsely populated parts of the UK - the lure of a “Twitter Ride” with a seven-time Tour winner was enough to draw in a sizeable peloton for the planned 30 mile loop from Dornoch to near Golspie by way of Loch Fleet.

Armstrong had arrived in the area on Friday to stay at the exclusive Skibo Castle for a spot of golfing r&r on Scotland’s far north east coast. Having been out on his bike on Saturday he tweeted: “Nice 35 mile ride in/around the County of Sutherland. Small roads, no cars, and beautiful terrain.” Later that day he tweeted the rendezvous for his second Scottish Twitter Ride – the first took place in Paisley near Glasgow back in 2009.

The faithful duly arrived at the appointed time and place - the Eagle pub in Dornoch at 5pm - for the chance to ride with the Texan. Such was the throng on Dornoch's main street that, according to the Scotsman newspaper, the police had to close it to regular traffic before the riders set off. With rain falling in the area while the ride took place, the paper says there were “a few accidents” among the riders, though apparently nothing serious.

After the ride Armstrong posed for photographs and signed autographs before heading back into Skibo Castle from where he tweeted: “Thanks Scotland for coming out for a little ride. To the 1000+ who came over Dornoch - you rock! Keep ridin'..”
Posted by Recovox at 3:37 PM