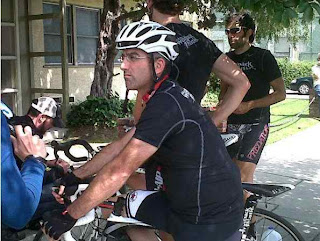 The six bicyclists racing a JetBlue flight from Burbank to Long Beach Saturday proved the power of the pedals, beating the flight by a long shot. The cyclists, members of the urban bicyclist organization Wolfpack Hustle, made the trip in 1 hour and 34 minutes, using the path along the Los Angeles River for most of the trek.

The cyclists and a blogger aboard the JetBlue flight left at 10:50 a.m. from the same intersection in North Hollywood –- with the blogger having to drive to the airport, arriving an hour before the 12:20 p.m. flight, then catching a ride to the aquarium in Long Beach, the finish line. The plane had just taken off when the cyclists arrived.

The cyclists had boldly predicted victory earlier Saturday morning. Joe Anthony, 33, who took the JetBlue flight, said the race was meant to show "how feasible cycling is in L.A.," And, he said, "maybe how ridiculous it is to fly 40 miles."
Posted by Recovox at 3:41 PM