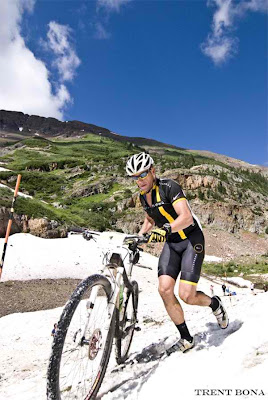 ​Look out, Leadville 100 competitors: Lance Armstrong is coming for you again after winning yesterday's Crested Butte Alpine Odyssey mountain bike race with a time of 4:32:21, three seconds ahead of second-place finisher Greg Krause and third-place finisher Travis Scheefer. The 63-mile Crested Butte Alpine Odyssey is the third and final qualifier for the Leadville 100 (August 13), which Armstrong has previously won.

"We had a last minute entry from Lance Armstrong, which came as a huge surprise for us all and made for great racing," reports race spokeswoman Erica Reiter.

Race organizers first learned Armstrong would be racing when he tweeted about it the night before the race.
Posted by Recovox at 7:24 PM