Tirreno-Adriatico remembers the victims of the Japanese earthquake 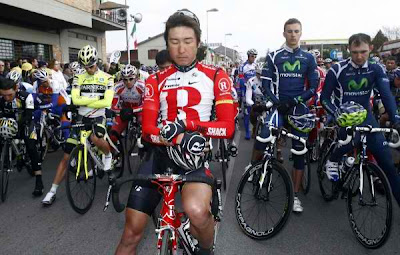 The Tirreno-Adriatico peloton gathered for a minute's silence before the start of the fourth stage on Saturday morning to remember the victims of the Japanese earthquake and tsunami.

Japanese rider Fumiyuki Beppu (RadioShack) stood head bowed at the front of the peloton, as the riders respected the moment of silence.

He revealed his parents were safe and plans to continue in the race. On twitter he thanked the riders who had shown their support but said “I'm worried. My parents were safe but there is so much damage because of this disaster. When I think about it, my heart is very painful.”

Today’s stage passes through the central Italian city of L’Aquila which was hit by a massive earthquake in 2009.

“We felt we had to do something to remember the victims of the tsunami,” race director Mauro Vegni told Gazzetta dello Sport.

Ivan Basso expressed the sentiments of the riders in the race: “It’s an incredible tragedy and hurts us all. We wanted to offer our support just as they helped us when we had an earthquake in L’Aquila,” he said.

The 240km fourth stage of Tirreno-Adriatico is from Narni to Chieti and is the first of two long days of the saddle. Sunday’s stage is from Chieti to Castelraimondo and is also 240km long.
Posted by Recovox at 1:27 PM