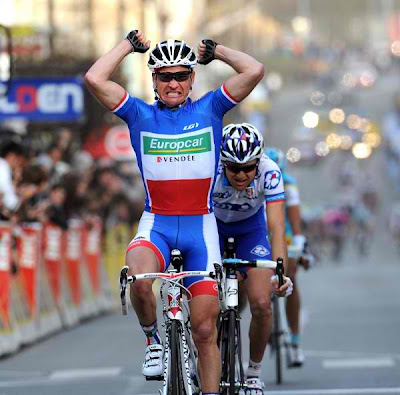 One day after surrendering his leader's jersey to Matt Goss (HTC-Highroad), De Gendt rode himself back into the yellow jersey in an improbable break which lasted nearly the entire stage. The Belgian won both of the intermediate sprints en route to the finish, picked up bonus seconds at the finish line and bested the peloton by 13 seconds to secure a return to the leader's jersey. De Gendt now leads breakaway companion Voeckler by 10 seconds and Pauriol by 16 seconds overall.
Posted by Recovox at 9:53 AM