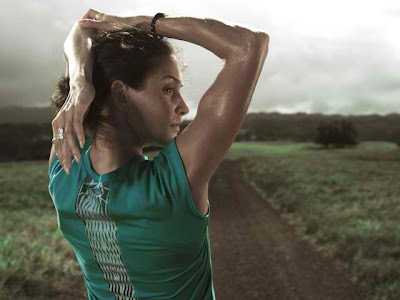 Yesterday I experienced something that I’ve been waiting to experience since my very first post-pregnancy run. I ran one of my key “measuring stick” workouts as fast as I used to run it before I got pregnant. I’m back!

The workout was a 10-mile tempo run at marathon pace. I averaged 5:22 per mile. That’s the same pace I averaged when I did the same workout before the 2009 Boston Marathon. I felt so relieved after I finished it. I celebrated by running another seven miles. (There’s no rest for the weary marathoner on a 120-miles-per-week schedule!)

I’m not exactly the same runner as I used to be, though, because I’m not training like before. When I prepared for my first three marathons, I trained more or less the same way I trained for the track, except I padded my volume by 20 miles per week. I tried to hold onto all of my track speed and layer a little extra endurance on top of it. But Alberto says that’s not real marathon training. So this time we’re letting my speed go a bit and building a lot more strength with much heavier mileage.

And, sure enough, I am slower but stronger than I was in 2009. I can’t hit the times I used to hit when I run mile repeats. In tempo runs, as I mentioned, I’m now right where I used to be. And in long runs I feel better than in the past. I used to dread my faster long runs. Now I feel at home in them. I have no problem starting a 20-miler at 6:30 pace and picking it up from there.

It would be nice if I could be as fast as I am when I focus on speed and stronger, but that’s not realistic. And when I hit the 20-mile mark in Boston, I know I’ll be glad that Alberto had me focus on strength.

Now that I’ve hit my tempo run milestone, I’m really looking forward to my next race: the New York City Half Marathon on March 20. I’m nervous about it, because this is the first race since I started my comeback where I expect to run up to my usual standards, no excuses. My main goal is not to win (although I’ll try my best) or hit a certain time but to be mentally strong the whole way through. At some point, I know the race is going to get really tough, and when that happens I want to avoid giving in and feeling sorry for myself. If I stay mentally strong the whole way through, the numbers will take care of themselves and I will walk away feeling good about Boston.
Posted by Recovox at 9:42 PM