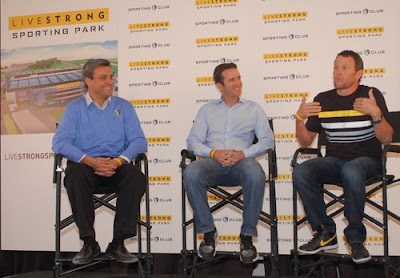 Inside of the nearly complete new Sporting Kansas City arena on Tuesday, the club and the seven-time Tour de France champion announced a unique deal that will name the team's posh new 18,000-seat digs Livestrong Sporting Park, and give Armstrong's organization a portion of all stadium revenue including ticket and concession sales.

The biker and cancer survivor, who retired earlier this year, and team president Robb Heineman, told assembled media and VIPs at a press conference in the stadium that the goal is to raise $8-$10 million for cancer research.

"It's the first-of-its-kind partnership with an athletic venue that's core mission is social change," Livestrong CEO Doug Ulman said. "And for us, it's just humbling to be a small part of it."

As part of the unusual deal, Sporting Kansas City is forgoing the traditional sports team route of selling stadium-naming rights. Team president Robb Heineman said he's fully aware that the club is turning its back on what he estimated could have been a $2.5-$3 million arrangement with a corporate name. But, he said, the team never considered another name.

SKC and Livestrong say the naming agreement is the first of its kind.
​"We weren't evaluating it up against XYZ Company. It just never really came down to that," he said, adding that SKC and Livestrong had been working on the deal for about eight months.