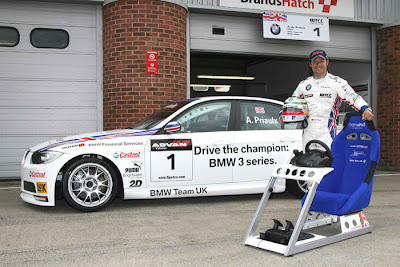 I have worked harder than ever on my fitness and I reckon I have never been in better shape.

I won't say you wouldn't recognise me if you saw me in the street, but lots of people who have not seen me since the end of the 2010 season are quite impressed with how I look now.

I've lost a couple of kilos and my body is really well toned and have been very strict with my diet, following one called the Primal Blueprint. I am not one for fad diets but this has been amazing.

I have cut out carbs and focused on meat and vegetables. The diet says it gives you "vibrant health and boundless energy" and this is certainly what I have got.

It's an exciting challenge ahead of me but feel I am ready now in every way. It all starts this weekend with the first round of the Intercontinental Le Mans Cup for the world's top sports and GT cars.

I'll be in a BMW M3 fighting for victory in the GT class against Ferraris, Chevrolet Corvettes and Porsches, which will make for fierce competition.

There is no better place to start our campaign. Sebring is an old track with an incredible history, having held the first US F1 Grand Prix in 1959.

It was previously used by the US Air Force, so there are parts of the track that are original runways laid in concrete, which makes it quite bumpy.

It is a pretty tough track that challenges both cars and drivers.

Teamwork is always important so I consider myself lucky to again be sharing the car with two great team-mates, my pals Dirk Muller and Joey Hand.

We came third last year so it would be great to be a couple of steps higher on the podium this year.

This whole week is intense as we are on track most of it to test and practise.

But for the fans, Sebring is very much a party event. American students are on Spring Break, so they descend on the place in their thousands to have a really good time.

They turn the centre of the track into a big party area where they pitch their tents and set up bars.

The noise that comes from it is often as loud as that made by the cars!

The ILMC will offer an entirely new focus for me. I'll be driving for two teams — BMW Team Rahal Letterman Lanigan in US races and BMW Team Schnitzer around the rest of the world.

I know all the guys from Schnitzer very well as they were my opposition for many years in the European and World Touring Car Championships.

I have also raced with them in the past at various events including the 24-hour races at Le Mans and Nürburgring.

It is bound to be hectic out there on the 3.7 mile Sebring circuit. There are about 50 cars entered so you can never relax and must concentrate like mad.

But I am a bit like my kids at the moment. I am excited and can't wait for it to start.
Posted by Recovox at 11:37 AM