DZ checks in from Tirreno Adriatico 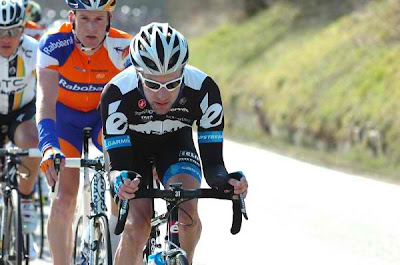 Yesterday I received an email from the team that said,“if you go you, leave at 2:00". Now I guess I too can be accused of sending out the occasionally cryptic email but this one was taking it to a new level and it had me stumped. I mumbled to myself ‘Go where?’ as I simply didn’t know what they meant. But there’s a touch of Sherlock Holmes in the DZ noggin and I put it together rather quickly that they needed me for Tirreno Adriatico, a seven stage race that would start in less than 24 hours. OK, sign me up, I want to go. And then I mumbled, ‘Ah, Italy in March. Bellissimo!’ But not everyone thought it was such a beautiful idea.

Because of the extremely short notice, the team fixed the flight so that I didn’t have to fly until today, the morning of the race, and notified the UCI that I wouldn’t be in the race hotel until mid-morning. A small detail, right? Well not so fast. I would later learn from the team that the UCI wasn’t going to allow me to race because all riders are required to be in the team hotel the night before the race begins. Well that’s not going to happen. To put my mind at ease Jonathan forwards me an email from a UCI official that grants the team and I permission (this one time) permitting me to arrive the morning of the first stage. But what I would later learn is that there are several UCI officials that hurriedly convene to discuss the matter. And in the end of much discussion they grant Mr. Zabriskie an exception. Fantastico!

It was nice spending the day with the family in Girona and not having to bolt out the door upon reading the email. Time with the family, well, I don’t take these little pleasures too lightly. So after some great family time we all went to bed early and I set my alarm for 5:45am. But around 3am I was awoken by noises in the kitchen. Startled, I venture in there to find my boy Waylon who answers my quizzical look with one of the most glorious explanations I may have ever heard. “My eyelids are too small and I can’t close my eyes, so I can’t sleep”. I snapped out of my slumber with enough laughter to wake the rest of the family. When I stopped laughing I decided to stay up with Waylon and maximize the family moment until I had to go. When I announced that plan the look on both of our faces was, well, Magnifico!

The taxi arrives on time, and it’s kisses and hugs to the family. I load 3 bikes and my other luggage into the car and we race off to the airport. I’m thrilled to report that check-in and the flight were quite easy and smooth, even with that much luggage, on one of the worst known airlines in the business: Ryanair. I landed in Pisa and my head is immediately flooded with memories of all the CSC camps that I did here.

We drive to the team hotel and I get there at 9:15am. I see a team director and he tells me to be ready to ride at 10am. OK, I can do that. When I walk into my room I see Thor and he immediately gets on the phone and calls the front desk and says ‘we have a problem with our toilet.’ We? I just got here. He’s joking right? Nope. And he’s sporting a sheepish look. I don’t want to say anything too harshly but I’d never mess up a toilet.

Well that gets sorted and we get all kitted up and we go to look at the course. Along the coast here I’m suddenly flooded with a lot of memories of my wife and I celebrating her birthday here in 2005. I’m liking this unexpected turn of events in my race calendar and now I’ve got all these good thoughts and feelings rolling through my head and body. I’m getting pretty excited for the race.

The team decides to take a ‘hot lap’ on the course and while I’m out front I completely miss a turn. I think I might be a bit sleep deprived, jet lagged and over-excited. But we get it all dialed-in and then go back to the hotel for lunch. I eat fast so I can take a 30 minute nap before take-off. I fell asleep quickly and woke up in what felt like less than 30 minutes . We go back to the starting area again. I get on the bus and have a quick coffee and then jump back on the bike and take another lap on the course. When I get back on bus, I go into the toilet and totally plug the thing up. Can I blame this on Thor? Nope. The guys are not seeing the humor in this and are getting upset because they too have to go. The bus driver calmly fixes it and we’re all relieved, literally.

It’s that time, time to roll. We go to the start area and, as is the UCI protocol, an official will measure up the bikes before we get on the start line. I see big George Hincapie and we say a quick, ‘hi’. But it’s all business now. The body and mind are ready. We get on the ramp. We mount. We focus. We breathe. And then we go. The Team Time Trial is a tricky test of team coordination. We have a good ride over the nearly 17 kilometers of the course, but not a great ride, and take 2nd place to Rabobank. We’re pleased, even though we know we are capable of better.

Back at the hotel I’m wasted. My body wants to rest. I should take some sleep but my mind is restless and I can’t help but smile about racing in Italy in March. Bellissimo!

For more on DZ check out his site at www.davezabriskie.com
Posted by Recovox at 9:15 PM