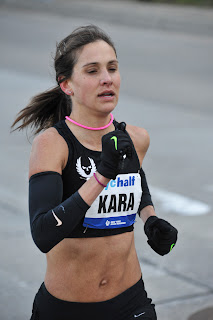 I’ve gotten exactly what I needed to get out of each race I’ve done this year. The difference with last weekend’s race—the New York City Half Marathon—was that what I need to get out of it was the satisfaction of a really good performance. And let me tell you, that was a lot more enjoyable than what I got (and needed to get) out of my previous race, the USA Cross Country Championships, which was pain, losing badly, and coming away with a fire lit under me!

Last weekend’s race wasn’t perfect. I’m still not 100 percent as fit as I could be, and I made one tactical mistake. But I came away from it pretty happy with myself. The first mile of any race is always telling. I wasn’t sure if I would feel great because of my recent breakthrough in training or flat because of the 120-mile weeks I’ve been logging. Turned out I felt great. And it didn’t hurt that the pace was honest but not crazy-aggressive. The first few miles in Central Park were hilly, and I was happy to see that I seemed stronger on the hills than most of the girls in the lead pack. That’s a good sign, considering I’m training for a hilly marathon in Boston.

In the past, when I’ve gotten about seven miles into a half marathon, I’ve found myself thinking, “I can’t believe I still have to run another six miles!” But that didn’t happen this time. I think that’s because of the heavy mileage and the strength work I’ve been doing.

At ten miles, the lead group really sped up, and split up. I went with the move initially, but then I started to worry about blowing up, and let three women go ahead of me. About a mile later I realized I felt fine. I hadn’t let the others go because I had to; I’d let them go because I was afraid. That was my big tactical mistake of the race.

I rallied and ran as hard as I could to the finish. I was able to pass Alene Amare Shewarge for third place, but I wasn’t quite able to catch Edna Kiplagat for second place. Still, my last mile was my fastest and strongest of the race. I almost felt like I could have kept going, which has certainly never happened to me before.

I must confess that I had an advantage in the race, though. From start to finish, spectators were shouting encouragement to me and holding up signs with my name on them. It gave me a big lift, although at times I worried that my competitors might be annoyed by all the attention I was getting. Oh, well, let them be annoyed! Thank you to everyone who was out there supporting me!
Posted by Recovox at 3:10 PM