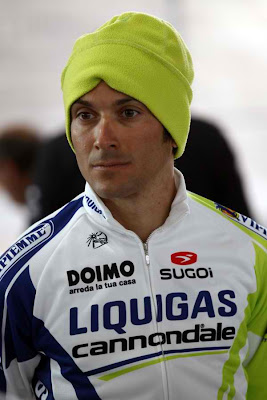 Ivan Basso is targeting overall success at Tirreno-Adriatico but has warned that Robert Gesink (Rabobank) could be the dark house of the race after his impressive victory at the Tour of Oman.

Basso is almost certain to miss this year’s Giro d’Italia to focus on the Tour de France and so Tirreno-Adriatico is his big goal of the spring. He is already on form and won the GP di Lugano on February 27.

“To ward off bad luck I’ll say I’m not the favourite but I’m feeling really good. It’s not a secret that this is a race I put a red circle around on my race calendar,” Basso told Gazzetta dello Sport before explaining the factors that are expected to decide who emerges as overall winner next Tuesday.

“The two time trials will be vital. For me they’re also an important test for the rest of the season. The length of the stages will also decisive, even more than the climbing in them. We’re going to be very tired on Sunday after the stage to Castelraimondo. Time bonuses will also be a factor because you can gain or lose vital seconds every day. I would have been happier if there’d been an uphill finish but it’s not a big deal. But I know I’ll have to suffer more than some of the more explosive riders on some of the stage finishes.”

This year’s Tirreno-Adriatico begins with a 16.8km team time trial around the Marina di Carrara. Liquigas won the team time trial at the 2010 Giro d’Italia and Basso considers the Italian team one of the favourites for today. Liquigas-Cannondale will start at 15:46 local time, with only Leopard Trek and Acqua &Sapone after them.

“My teammates are strong, motivated and can do well,” Basso said.

“We’ve got a well-drilled line-up with only two new riders: Marangoni and Caruso, who know how to do well. We’ll have a good chance of winning, along with Leopard Trek, Team Sky, Saxo Bank-SunGard and HTC-Highroad.”

Vincenzo Nibali will also be in the Liquigas-Cannondale team for Tirreno-Adriatico. He has only recently started his season and will ride in support of Basso, who again insisted there is no rivalry between them.

“I’m happy he’s riding. Vincenzo hasn’t changed since winning the Vuelta; he’s still a good guy. The only difference is now he knows how good he is. We both know that being rivals would damage both of us.”
Posted by Recovox at 9:47 AM