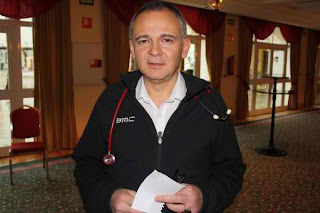 BMC team doctor Max Testa has spoken in support of the UCI’s Biological Passport but warned that the programme is still in the process of being refined and perfected. The Italian also suggested that in the future, anomalous power output figures could be added to the list of parameters used to target riders for anti-doping controls.

“The biological passport’s main value is that it tests riders out of competition so that you can look at the changes in biological parameters, because unfortunately there are products you cannot find in urine,” Testa told us recently.

“I think that the shift in concept from looking for forbidden substances in the urine to the biological effect of these substances is the way to go.”

The Biological Passport faces a stiff test this week as Franco Pellizotti and the UCI make their cases before the Court of Arbitration for Sport. The Italian rider was sidelined when he fell foul of the passport ahead of last year’s Giro d’Italia but he was then cleared by Italy’s Tribunale Nazionale Anti-doping in October on the grounds that his blood values could have been altered by factors other than doping.

Testa acknowledged that the passport is still a work in progress, but he stressed that the important thing is to gather as much information as possible in order to create detailed biological profiles and tighten the net on doped riders. However, he admitted that the data gathered is still open to interpretation.

“There are areas that can be improved but the more we use it, the more we can learn,” Testa said. “The main concern I have as a physician is that the variation [of blood values] can be huge. We don’t know what the variability is in this specific population [professional cyclists], as they train a lot and travel a lot, so maybe their variations are not exactly the same as those of average people.

“Most of the studies they use to support this are done on athletes, but not athletes to this extreme level of fitness, so there is a margin of uncertainty and some fluctuations can be physiological in this specific group.”

On the particulars of interpreting Biological Passport blood values, Testa maintains that a certain degree of fluctuation is natural, whereas perennially fixed blood plasma numbers should arouse suspicion.

“To be honest, I like to see some kind of fluctuations because that is the way it should be,” he explained. “It’s natural: when you train, you expend plasma volume and you expect the numbers to be a little diluted. When you don’t train, the numbers go up. What’s not normal is when you see the numbers going up after a stage race.

“The problem is how we interpret the variation – is a stable number good or is it bad? Sometimes it’s better to see some variation rather than someone always at the same number, because you can think that that is also the result of manipulation. We’re just learning.”

One of the criticisms the Biological Passport system has drawn is that it is not being backed up with dedicated and targeted anti-doping controls. WADA’s independent report into the UCI’s testing at the Tour de France drew stark attention to the issue and Testa agrees that the newer biological testing must work in tandem with traditional controls.

“I’m not sure if I would use the [biological passport] parameters to say a guy is doing something but it would make me focus more on the athlete and do more controls on him,” Testa told us. “They have to work together.”

Testa also believes that while biological passport data can be used to target riders for testing, it could also be used to establish culpability when a rider returns a positive test for a product that he or she claims to have used or consumed accidentally, a recent case being that of Alberto Contador.

“If you find a small amount of something in the urine but the biological parameters are stable, it means that they were either trying to use a performance enhancer without knowing how to use it and so were not getting the benefit, or else there was a contamination,” Testa said.

“I don’t think we have a mistake-proof system right now. Maybe one day in the future we can test riders’ hair twice a year and see what they’ve done for the previous six months but right now it’s the best we can do.”

Testa was previously team doctor at 7-Eleven and Motorola, and a number of riders from that set-up would later go on to become important figures in the controversial US Postal Service team, which is the focus of a federal investigation in the United States. The Italian claims that the increased availability of biological data means that it is now easier to keep tabs on his riders’ activities than it was when he first entered professional cycling.

“When I started in the 1980s, we couldn’t even look into the athletes’ blood, there was nothing,” he admitted. “You had no way of knowing if a rider was having a blood transfusion if he didn’t want to tell you. You were just there, maybe worried that this guy was doing something, maybe thinking, ‘I heard that he’s training with this other guy…’ So there were a lot of dark areas.”

Last season, BMC joined the growing band of teams that have abandoned “internal” testing programmes and Testa explained that it was simply because they felt such testing was superfluous with the advent of the biological passport programme.

“30 [biological passport] tests a year is already enough and we really support the effort of the UCI and WADA with the biological passport,” Testa said. “I don’t think that we were bringing anything more by doing more tests.”

While internal dope testing is no longer on the agenda, BMC has stepped up the level of physiological testing it performs on its riders, and Testa believes that in future such analysis could play a significant role in the fight against doping. Every rider at BMC is equipped with an SRM power-meter and must upload his data after every training ride and race for analysis.

“We have an internal testing for physiology, so we test the athlete for the whole year, so that could be seen as part of all of this [the anti-doping effort],” Testa said. “This year we have SRM power-meters and by contract the riders have to load their data everyday. We have three people that analyse their power files. Every week we have a report, we see how the spectrum of the power changes and that can be done to see how good they do but also if there is any variation. It’s like a biological passport applied to performance.”

While Testa reiterated that an unusual fluctuation in power output alone is not a reliable indicator of doping, such information could be used in conjunction with other available data to step up testing on specific riders.

“I think it’s even a little more complicated than the biological passport because some of the conditions aren’t standard, but if you enough data for each athlete, you know how much power they can sustain for 20 minutes or an hour or whatever and you expect a certain trend of improvement through the season,” he said. “Then maybe the next season you have all the data of the year before, and if you see the numbers start to go up at a time when they are not training or only training a little, that could be a warning.

“You cannot use it to judge in and of itself, but it’s an extra way to approach the problem.”
Posted by Recovox at 10:28 AM