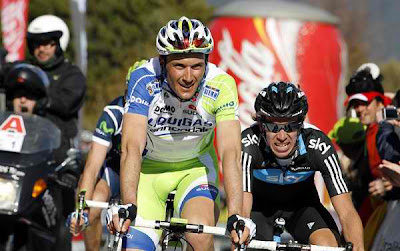 Italian lost some time but vows to fight on

Ivan Basso, who had announced that he came to the Volta a Catalunya to win it, had to give in to somebody stronger than himself in yesterday's queen stage up to Andorra-Vallnord. Saxo Bank's Alberto Contador simply shrugged off any attempts to destabilise his reign as he set out on the final climb's steep slopes to take the stage victory and overall command.

Basso finished seventh, 38 seconds down on the Spaniard, and acknowledged his helplessness with regard to his rival. "There was nothing I could do," the Italian told La Gazzetta dello Sport. "Contador was clearly stronger. When he attacked, it was impossible to follow him.

"I'm not happy with my performance, but I'm not really disappointed, either. I had other expectations for this stage, but you also have to remain realistic," said Basso, who had announced his will to win the summit finish stage as well as the overall classification before he started the race.

The 2010 Giro d'Italia winner assessed his showing in light of his competitors. "When all the best riders are there, it's always difficult to know whether it's you who are going slowly or the others who go very fast. I lost 15 seconds on Scarponi, who has exceptional form, and I took 12 seconds from Evans... It's a discreet performance. Now, I will try to do something on the remaining stages."

The Volta a Catalunya still has three stages left before it finishes in Barcelona on Sunday. Friday's stage five is particularly mountainous and could see Contador's overall lead threatened, even if it is not a summit finish.
Posted by Recovox at 2:48 PM