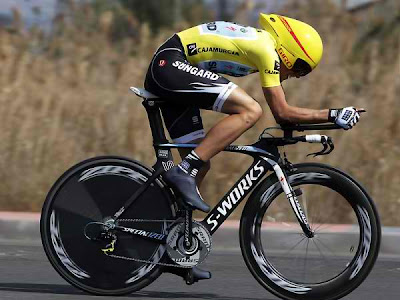 Saxo Bank-SunGard team manager Bjarne Riis has compared Alberto Contador to some of the most successful riders in the history of the sport after he dominated the Vuelta a Murcia with stage victories on the uphill finish and the final time trial.

The three-day Spanish race was only Contador’s second stage race since being cleared of doping in Spain and the UCI has to still to decide on an appeal to the Court of Arbitration for Sport. However, Riis was not afraid to praise Contador.

“Contador is the strongest rider I’ve ever had in my team. Alberto is of the same calibre as Merckx, Armstrong, Hinault and Indurain,” Riis told Gazzetta dello Sport, implying that the Spaniard is better than his former protégés such as Ivan Basso, Andy Schleck, Carlos Sastre and Tyler Hamilton.

“He’s a fantastic climber because he’s an animal on the climbs and then in time trials, he manages to put out virtually the same amount of power.”

Contador covered the 12.4km time trial in Murcia at an average of 52.518km/h. Gazzetta estimated that Contador must have produced between 430 and 440 watts of power to go so fast. Riis was careful not to reveal Contador’s physiological data, preferring to point out the work he has done with the Spaniard to make him even more aerodynamic.

“In time trials it’s not about the power but about aerodynamics,” he insisted.

“Contador had a good position but I’d had a few things in mind ever since last year’s Tour de France. This winter we worked a lot to improve his position. We made minimal but important changes. He’s more compact on the bike now.”

Contador revealed that the Saxo Bank-SunGard riders did a 150km training ride on their time trial bikes last week in Mallorca.

“We’ve worked on finding the best compromise between speed and comfort. My position in Algarve was new and then in Mallorca we did more tests on the road and the track. My position for Murcia was more evolved and we’ve shortened my position by about two centimetres especially with the bars and stem,” Contador explained.

“I train on my time trial bike quite often but I’d never done 150km in a day like we did last Monday in Mallorca. It was hard but you can see the results.”

Contador has opted for a mainly Spanish race program in the first part of the season. He will be back in action at the Volta Ciclista a Catalunya that begins on March 21.
Posted by Recovox at 11:45 AM

what a gorgeous bike.