There is no dishonor in being passed by Lance Armstrong 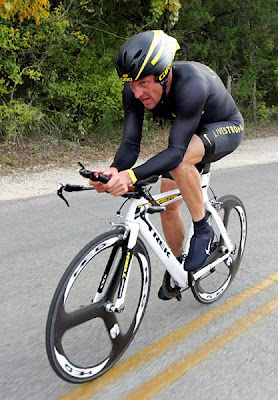 In the course of his storied career, he has passed or left behind everyone. And as of Saturday that now includes me.

For seven years running, Armstrong was the very best rider to enter the Tour de France, cycling's seminal event. Those seven consecutive victories from 1999 to 2005 probably constitute one of sport's most untouchable records.

Soon the world will be watching to see if Armstrong, 37, can emerge from retirement after three years and do it again.

He is driven, no doubt, at least in part by one of the most competitive spirits on the planet, but his return also will keep his name and his cause in the spotlight. So, even as he cycles through Italy, and we fans hope, into France, he also will raise tens or even hundreds of millions of dollars more for the Lance Armstrong Foundation and its global mission to unite people to fight cancer.

Before Armstrong departs for Europe and his return to the racing circuit, however, he came down Interstate 35 from Austin to ride in Saturday's inaugural individual time trial race in the 25th Tour de Gruene Bicycle Classic.

His entry electrified the event, more so because it would be Armstrong's only scheduled race in the United States this year.

Cycling and road racing in South and Central Texas hardly register on the radar screen and seldom win much play in the state's biggest newspapers.

But a resurgent Armstrong deciding to race in Gruene along the likes of, well, me, is not unlike Tiger Woods announcing he will play a couple of rounds with the locals at Brackenridge before he officially returns to the PGA Tour.

It isn't the first time Armstrong has created a buzz by riding in the Tour de Gruene. More than a decade ago, still fresh from battling his own cancer, Armstrong came within seconds of winning the team event and soon afterward silenced all doubters with his now epic comeback.

It so happens that last year's Tour de Gruene was my first experience riding in a time trial race, and this year I leapt at the chance to enter both the first individual time trial as well as today's team time trial.

I was riding as hard as my 55-year-old legs would allow, covering the last half of the 16-mile course that followed River Road along the banks of the Guadalupe River when I noticed a rider wearing number 90 just standing on the roadside with two other cyclists.

Race organizers had told me that Armstrong was wearing number 90, so it struck me as odd that Armstrong, not due to race for 30 minutes, was out on the course.

I also noticed that one of the riders with him was Agustin Magallanes, circulation director at the Laredo Morning Times and, perhaps, the most accomplished rider on the Third Street Grackles cycling team, which I captain.

I cycled on and, nearing mile 13, began to envision the finish line. I pushed harder, desperate to break the 50-minute mark, shooting for a 19-20 mph average pace.

My speedometer read 23 mph when suddenly Armstrong blew by me at a speed that left me thinking I was not actually moving on my own bike, no matter what my speedometer was reading. The two other riders, who were not in the race but had staked out spots hoping for just such an encounter, clung to Armstrong's rear wheel, riding for all they were worth.

Armstrong, of course, was only warming up. A half-hour later he went off as the last rider in the time trial, and predictably, he handily won the event. Armstrong covered the 16 miles in a little more than 33 minutes. It took me 49 minutes.

It's never felt to so good to get beat so badly.

I'll follow his comeback after three years away from the sport with keen interest, but I'll follow his efforts to build his foundation even more closely.

There are few world-class athletes able or willing to leverage their status as iconic athletes into an even higher pursuit, namely making the world a better place.

Saturday, for a few fleeting seconds, I rode near the guy doing just that.
Posted by Recovox at 10:47 AM