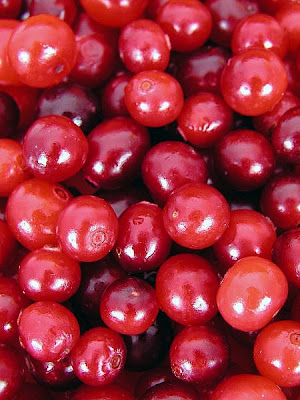 Benefits Come in a Variety of Forms
Cranberries contain bacteria-blocking compounds that are believed to be helpful in preventing urinary tract infections, and scientists now think this same function may be useful in blocking the bacteria responsible for ulcers and certain oral bacteria that can lead to gum disease. Current research indicates that approximately 10 ounces of cranberry juice cocktail is needed daily to achieve the bacteria-blocking benefits that ward off UTIs, ulcers and gum disease. You can get these benefits in an array of cranberry products. For round-the-clock protection, snack or cook with one of these products at least once a day.

Compositional and Nutritional Information
Cranberries are considered a healthy fruit. They contain no cholesterol and virtually no fat and are low in sodium. Various cranberry products may contain substantial levels of dietary fiber and certain vitamins, as well as a variety of photochemical that may be beneficial to health.

Health Consideration
Historically, the health-promoting properties of cranberries have been based on folkloric remedies, which have existed for centuries. The healthy giving properties of this fruit were recognized by Native American Indians, and early New England sailors are said to have eaten the vitamin C-rich wild cranberries to prevent scurvy. Recent studies confirm the idea that cranberries and cranberry products are beneficial to health.

Availability and Usage Suggestions for Fresh Cranberries
Fresh cranberries are available in stores mid-September through December. They are most abundant during peak harvest season-October and November. Cranberries may be stored in the refrigerator for up to four weeks. Before using, sort and rinse cranberries in running water. Buy fresh cranberries in season, then freeze them to enjoy them all year long. To freeze fresh cranberries, double wrap them in plastic without washing. When using frozen cranberries in your recipes or formulas, no thawing is necessary. In fact, best results are obtained without thawing.

Urinary Tract Health
One of the best-known benefits of cranberries is their use in promoting urinary tract health. Since the turn of the century, cranberries have been used as a folk remedy for the treatment of bacterial urinary tract infections (UTIs), which cause frequent and painful urination. The first reported use of cranberries by conventional medical practitioners was in 1923 , where it was suggested that cranberries acidify the urine, thus killing the bacteria causing the UTI. More recently, heightened scientific interest and laboratory research appear to validate the effect of cranberries on UTIs but present an explanation other than urinary acidification.

A 1994 study conducted at the Harvard Medical School determined that regular consumption of cranberry juice reduced the amount of bacteria in the urinary tracts of elderly women. Rather than acidification of the urine, these researchers concluded that something specific to the cranberry actually prevented bacteria from adhering to the lining of the bladder. In 1998, researchers from Rutgers University identified the specific components in cranberries that function as previously suggested. These condensed tannins or proanthocyanidins from the cranberry fruit prevent Escherichia coli (E.coli), the primary bacteria responsible for UTIs, from attaching to cells in the urinary tract. Thus, the bacteria are flushed from the tract rather than being allowed to adhere, grow and lead to infection.

Phytochemical and Antioxidants Attributes
In addition to their urinary tract health benefits, cranberries also contain Phytochemical that may assist in maintaining health. Scientists believe that it is the combined actions of many different phytochemicals that contribute to their overall effects, and cranberries are rich in these compounds. Some of these phytochemicals act as antioxidants, compounds that help neutralize harmful free radicals in the body. These antioxidants reduce oxidative damage to cells that can lead to cancer, heart disease, and other degenerative diseases.

For example, anthocyanins, compounds that give cranberries their red color, are powerful antioxidants that may be stronger than vitamin E. In addition, laboratory studies have shown that cranberry extract reduces oxidation of LDL-cholesterol (so-called “bad” cholesterol), an effect which research indicates may be important in maintaining a healthy heart. Thus, when consumed as part of a well balanced diet containing a variety of foods, cranberries may provide positive health benefits.
Posted by Recovox at 10:10 AM

Cranberry is one of the most popular remedies for UTI. Another natural way to treat UTI is herbal UTI relief medicine. This medicine does not have any side-effects. Try this medicine to get rid of UTI.