Armstrong returns to the wind tunnel


Lance Armstrong's return to the top level of professional cycling has taken place at the San Diego Air and Space Technology Low Speed Wind Tunnel. It was the first time in almost four years that the Texan has tested his aerodynamic form on a bike, but Armstrong settled quickly back into the groove and started the first wave of what will undoubtedly be many sessions tunnel.

"What we are trying to do today is establish a baseline so we are starting with Lance's position from 2005 and will go from there," remarked Steve Hed, who, as Armstrong's chief aerodynamic consultant, had scheduled the time in San Diego. 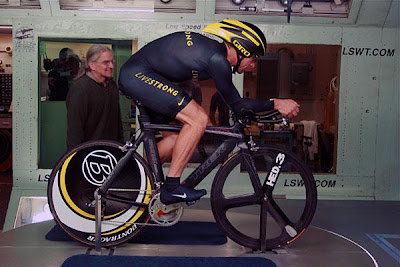 Coming off two wins this past weekend in time trial events in Texas, it might seem like Armstrong is already back in racing form but long-time coach Chris Carmichael was quick to point out that Armstrong needs to start ratcheting up his training program to focus on speeds of 30+mph which are necessary to win major time trials. Clearly, while Armstrong has a powerful motor a lot of the groundwork needs to be done in the wind tunnel, especially after such a long hiatus. 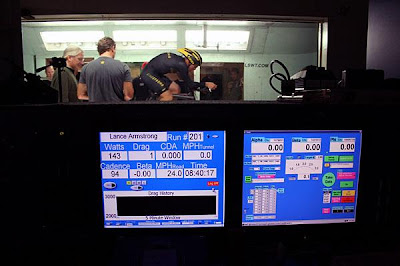 Armstrong gave an assessment of his first session. "It feels a little different right now because I am fitter now than I usually am in the off season," he said. "I haven't been bent over in a time trial position in a few years. It is a lot different than coming in the middle of the season. I have a better appreciation now of going into the wind tunnel. I suspect we will come back during camp before the Tour of Calfornia."

Trek's road brand manager Scott Daubert indicated that the time trial bike Armstrong was testing, the TTX, was only a prototype when he last rode the bike at the 2005 Tour, now it is in full production and has been ridden successfully by Armstrong's new team-mates Alberto Contador and Levi Leipheimer.

The Texan gave some insights into his racing program for 2009. "I am going to Italy [Giro], I am going to do Tour of Flanders, all the classics of cycling [except Roubaix], Tour of California, Criterium International, Circuit de la Sarthe," he said.

Also slated to join in the testing in San Diego are Contador, Leipheimer and phenomenon Taylor Phinney who will lead Armstrong's U23 Livestrong team.
Posted by Recovox at 10:07 PM