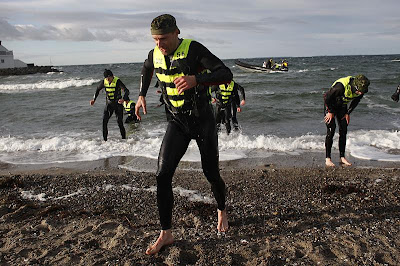 The name has changed from CSC to Team Saxo Bank - IT Factory, but the new season started the same it has since 2001 – with a survival camp. Each year, the team headed by Bjarne Riis goes to a different location and gets to build character and team work ahead of the road season. This year's camp ran for ten days, with the actual survival part between three to five days.

Like in previous years, former paratrooper Bjarne S. Christiansen led the military style camp. Because the team is Danish and the two main sponsors are Danish, he decided to have the camp in Denmark, after visiting places like Norway, South Africa or Lanzarote in the past.

Like Lanzarote, this year's camp involved being near and in water, but the water temperatures were much colder. The weather at least was good for the recruits, with sunny skies making sure that not more misery was brought upon them.
Posted by Recovox at 10:07 AM