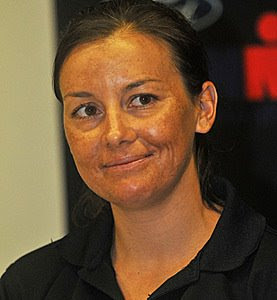 When I found out I was going to be racing at the Malaysian Powerman, I immediately thought of my team mate, Erika Csomor, or Miss Coco. Miss Coco is duathlon royalty having won Zofingen many occasions. So I figured if I could take a small leaf out of her book, I’d be fine.

The week leading up to the race, my training had been going well, and I was excited to have the opportunity to race a format that I was not familiar with. My only expectations were to go hard, and to have fun. Unfortunately, I must of been channelling too much energy from Miss Coco, because like Erika, I found myself battling a cold a couple of days before the race, (my first for the year!). Thankfully, I suffered the worse of my cold the two days leading up to the race, and I woke up race morning, feeling ok and able to breathe.

But once again, the energy I drew from Miss Coco, was simply too strong, and as I zipped up my race suit the morning of the race, I busted the front the zip, just as Erika had done in her 70.3 race in Austria. With a couple of safety pins across my chest, I was good to go. I just hope there is no photographic evidence!!! Even though I was wearing a crop top underneath, I felt very ‘busty’, and looking like I was popping out.

And that’s where the similariites between Miss Coco, and I ended :(. As much as I’d like to say, I smashed that course, I can’t. The first run, was the part I was most nervous about. As strange as it sounds, I would much rather run off the bike, than fresh. My goal for the first run was to minimise any losses between myself and the front runners. It was a two looped run, and on the first loop I managed to keep the first girl (nz girl, Victoria Beck) within my sights. However, on the second lap, I felt the overwhelming urge to ‘find a bush ;). I managed to hold it, but lost a bit of time in the process. Once I got on my bike, this urge went away (thank god!).

The bike ride went well for me. In training, I’d been hammering some big gears, so I was keen to experiment with this style of riding under race situations. So I put my head down and pushed hard. This was definitely a great ride for me, and I felt like I got stronger as the ride progressed.

I rode into first place before half way, so I came off the bike in front. I wasn’t sure of how much of a lead I had, but I ran solidly regardless, because I wanted to not only win, but have a hard training day too.

When I crossed the finish line in first, I sort of did not believe it. Had I actually managed to finish a race??? And win a race??? A duathlon??? I was so happy, so relieved, and so content with being able to actually ’switch off’ my thinking head, and ’switch on’ my racing head again.

For now, it’s back to the hard work here in Subic Bay. I have three more weeks here, before I leave for Busselton, and I am keen to make the most of my time here.
Posted by Recovox at 6:26 PM