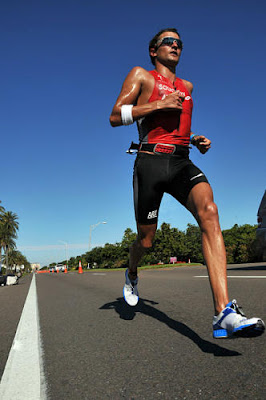 Earlier this year Terenzo Bozzone was an angry young man. The 23-year-old had dreamed of making the Olympic team to represent New Zealand in Beijing. Instead he was left off the team. He turned his focus on Ironman 70.3 - today that proved to be a great move as he claimed the world championship.

"I’m in a fairy tail dream at the moment,” he said minutes after the race, still so excited he was practically hyperventilating. “It’s everything that I’ve wanted and more.”

To win today Bozzone had to beat all but a few of the fastest men ever at Ironman 70.3 racing. Leading the way at the start of the day was defending men’s champion Andy Potts, who led out of the water and through most of the first half of the bike. At that point, though, he was joined by a group that included many of the race favorites. Oscar Galindez powered to the front at that point, but wasn’t able to stay there as the fast-riding group.

It was a quick transition that put Bozzone in front starting the run and no one could catch him from there on in. To say he was thrilled would be an understatement.

“Third time lucky,” he laughed. “The competition here is so awesome. Craig Alexander won the first year, Andy Potts the next. They’re both unbelievable athletes – this is definitely the crème de la crème of Ironman 70.3. I probably overdid the first couple of years doing everything I could to win. Today I was going for the perfect wave and today I found it.”

Bozzone’s day wasn’t without a bit of a scare, though, as Germany’s Andreas Raelert put together a blazing run split to close to within 32 seconds by the finish line. The German put together a 1:10 run split, but ran out of real estate as he gained on Bozzone. Richie Cunningham put together yet another top finish here in Clearwater to claim third, followed by Oscar Galindez and another 23-year-old, Reinaldo Colucci.

After two years of seemingly not racing to his potential here in Clearwater, Bozzone tried a slightly different tactic – one which worked like a charm:

“Coming from the ITU racing, everyone runs fast there,” he said. “This year I held back a bit on the bike and gave it all on the run.”

You can’t win the Foster Grant Ironman World Championship 70.3 if you aren’t a great swimmer, cyclist and runner. Today we saw once again that putting it all together and being strong on the run can make all the difference. Just ask the man who held off the best in the world today to claim a world championship, Terenzo Bozzone.