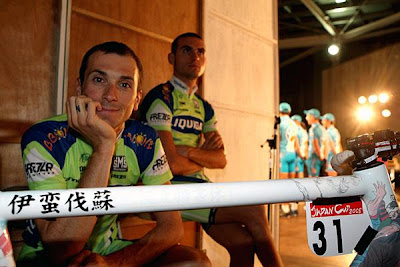 Ivan Basso is back to racing after a forced rest of two years due to his involvement in Operación Puerto. The Italian, winner of the 2006 Giro d'Italia, looks to set the records straight and prove himself stronger than before while giving Cyclingnews' readers an inside look.

Basso first rose to prominence with his Under 23 World Championships win in 1998. The greater cycling public took notice of him when he won the stage to La Mongie ahead of Lance Armstrong on the way to a third overall in the 2004 Tour de France. He placed second the following year and won his home tour in 2006; however, his last major competition was the Castilla y León in 2007.

The Italian cycling federation (FCI) served him a 16-month suspension in June 2007. He came back to racing two days after his ban ended at the Japan Cup, October 26. He finished third in a close finish behind Damiano Cunego and Giovanni Visconti. The result was promising and Basso hopes there will be even brighter days ahead in 2009.

To read his diary click on the title link.
Posted by Recovox at 5:57 PM