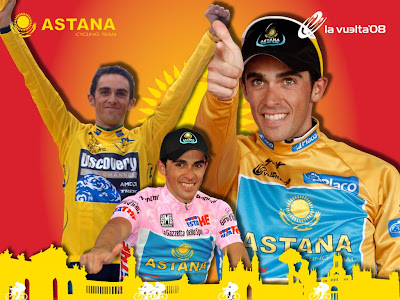 The Spanish climber heads to Spain’s Canary Islands this week for Astana’s first pre-season training camp ahead of the 2009 season, where he will finally meet his new teammate Lance Armstrong face-to-face.

Following a successful surgery last week to repair a deviated septum, Contador still won’t be able to ride his bike until Thursday. In the meantime, he will continue with his gym work and do all that other pre-season stuff, like pose for pictures, plan his calendar and meet new riders and staff.

Question: How has this winter been?

Alberto Contador: Very busy. After 2007, winning the Tour, and this year with the Giro and Vuelta, I’ve had many commitments and I haven’t been able to disconnect like I wanted to. I have my head in a good place and I am excited to begin. As soon as I recover from the surgery, I will ride again and concentrate on my training.

Q: Are you excited to return to racing?

AC: Yes, I am a ride who likes to compete and race my bike. I am ready to arrive at the camp, get to know my new companions, greet the other ones and begin to plan the season.

Q: What are your expectations from this first training camp?

AC: Above all, it will serve to unite us even more, because now there’s no pressure and we can do things now that will be later impossible to do. We will make a strong group and work that things go as well as possible this season.

AC: The team this year is very good and we’ve made some important reinforcements. Of Haimar Zubeldia, you already know of his quality and we don’t need words. He can have a fundamental role in three-week tours. Another big last-minute score has been the arrival of Popovych. He worked hard during the 2007 Tour and he’s very happy to be able to come back with us. Then there are other riders, like Jesús Hernández, who I normally train with, who I believe this year will make a big improvement and it will be noticed by the team.

Q: And then there’s Lance Armstrong, what will his contribution be?

AC: Without a doubt, his great experience. He has been able to win seven Tours and with that comes both physical and mental. His contribution will be very important for the Tour and, sporting wise, he will be fundamental. Although up to now his level is still unknown, I am convinced he will strengthen us even more.

Q: What are your objectives for this year?

AC: Without a doubt, the Tour de France. It’s the most important race, the race that changed my life, and since this year that I could not be there, my biggest goal is to race it again. I know it will be very difficult to win for the high level of competition and the amount of things that can happen to you in the course of 21 days of competition, but I am going to fight to the maximum to achieve it. Thinking about the Tour has permitted me to begin more relaxed, also because of the operation.

Q: Besides the Tour, do you have other goals?

AC: Yes, also I want to work on my position on the bike, including both the road bike and the time trial, to optimize my performance. Although this year, the time trials in the Tour are almost half of what they were in 2007, to improve in the time trial is one of my goals and, of course, I want to continue enjoying the bike as I do now.

Q: What motivates you right now?

AC: To achieve the objectives I set out for myself. I am a rider that doesn’t take a lot to train, but more so when I have an objective to achieve. I don’t like to train just to train. I like to give my all to achieve the maximum performance in competition and later, I also like to rest, just as much physically as psychologically, because the competition also wears you out mentally.
Posted by Recovox at 10:21 AM