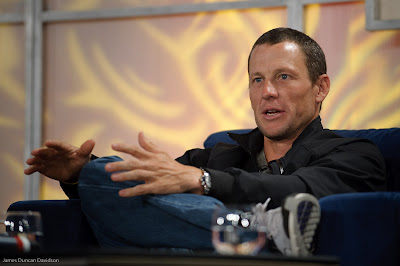 Lance Armstrong has had a whirlwind two weeks, beginning with a speech in Florida October 28, onto Copenhagen, Denmark for the same, winning two time trials in Texas, onto Dallas for a friend's funeral, then time spent in southern California for wind tunnel and velodrome testing, all by November 5. So what does the 37-year-old do in his spare time?

The Texan took the stage at the Web 2.0 Summit Wednesday night in San Francisco, speaking with John Battelle, founder and chairman of Federated Media Publishing. Armstrong spoke for 38 minutes, covering the bases openly about the recent presidential elections, his training, reasons for coming back to pro racing, and why he's wired the way he is. He also spoke about using Twitter, a social networking tool that he started using recently.

The relaxed cancer advocate spoke about his ego, and shared many insights to the Silicon Valley audience, including Yahoo! founder Jerry Yang. He also talked about forming livestrong.com, a for-profit web venture, in addition to forming the non-profit Lance Armstrong Foundation/Livestrong.org, before taking questions from the audience.