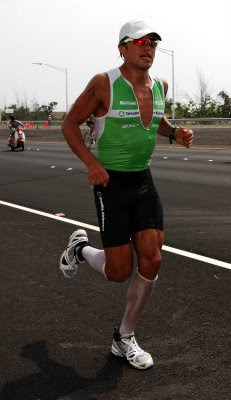 At first glance, they appear to be a statement of retro style. But a closer look reveals the knee-high tube socks many elite distance runners race in are anything but rekindled 1970s apparel.

They're graduated compression socks -- snug-fitting, over-the-calf socks (some of which start at the ankle) aimed at improving oxygen delivery to muscles, speeding lactic acid removal and stabilizing the lower leg for greater muscle efficiency. A handful of front-of-the-pack road runners swear by them, including Lornah Kiplagat and Gete Wami. Women's marathon world-record holder Paula Radcliff e has also worn them in the past, although not in the BUPA Great North Run Half Marathon or the ING New York City Marathon in 2007.

But do they work? Compression socks and wraps have been widely accepted in clinical and post-surgical settings for the treatment of edema, lymph edema, phlebitis, varicose veins, spider veins and deep vein thrombosis. Most theories about how the socks can improve running performance focus on the physiological and biomechanical support of the lower extremities.

The primary rationale behind wearing compression socks in a race is that they may enhance venous return to the heart through a more efficient calf muscle pump, leading to increased endurance capacity. And there is the notion that because muscles are kept more compact, balance and proprioception are improved and muscle fatigue is minimized.

However, a study presented at the 2007 American College of Sports Medicine annual meeting in New Orleans suggested there were no statistically significant differences in maximal oxygen consumption, heart rate or minute ventilation between treadmill runners who wore compression socks and those who did not. According to the study, conducted at Stellenbosch University in South Africa, subjects did, however, show a faster lactate recovery rate after exercise when wearing the compression socks, suggesting that compression socks might speed recovery after a strenuous workout or a race.

So wear them in a race if it suits you, but definitely wear them after the race.
Posted by Recovox at 11:56 AM