Savoldelli: Armstrong Is One-Up On His Rivals 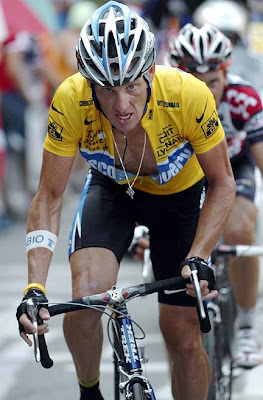 Recently retired Paolo Savoldelli believes his former-teammate Lance Armstrong is a notch above the competition. The Italian from Bergamo expects 2009 to hold more successes for the American who recently announced his comeback.

"They tried to cut him down in every way, but it was not possible. I can guarantee to you that there is no magic potion, I raced with him, believe me, he has something more than the others," said Savoldelli to Tuttosport.

Savoldelli turned professional in 1996 and went on to win two editions of the Giro d'Italia. He was a teammate of Armstrong in 2005 and helped him achieve one of his seven Tour de France wins.

"He loves to stay at the centre of attention, in the limelight. ... He carried out tests before announcing his return and he understands that he can still win. He is starting early on, debuting in January, because he needs a base. He will be at the Giro but his objective is to win the Tour."

Armstrong announced his return to the sport this September. It will be three and a half since he last raced at the sport's highest level when he lines up for the Tour Down Under, January 18 to 25.

Savoldelli competed against many of cycling's biggest names in his years as a professional. He believes Armstrong made the biggest impact on him – more than Marco Pantani, Gilberto Simoni, Ivan Basso and Damiano Cunego. "Armstrong was above all. I raced in the same team and he is an extraordinary character, truly unique."
Posted by Recovox at 11:33 AM