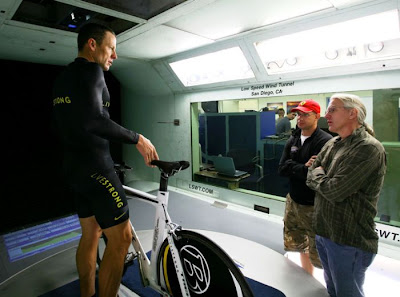 Aero guro Steve Hed’s thoughts after being in the wind tunnel with Lance.

Why go back to the wind tunnel after so many successful Time Trials over the years?

Well, after Lance decided to come back to racing in 2009 the decision was made to put the “F1” team back together. This is the group of people that we used the last couple of years Lance was racing the Tour. Carmichael Training Systems, Giro helmets, Trek bikes, and Hed wheels were the main folks back from 2005. So for instance the bikes have gone through a couple of changes since then, so Trek is working to come up with a super Time Trial bike – we’ve seen the Madone just getting better and better over the last few years – but there are also some new UCI rule changes and we have to make sure that the equipment is designed around them, too. We spent a lot of time working with Giro and some of the new helmets they’ve been working on. It’s not that these companies weren’t working on this to begin with, but with Lance’s return let’s just say they’re a bit more accelerated these days!

Some people have said that Lance may be fitter at this time of year than in the past, would you agree with that?

I don’t know if he’s more fit, but he is certainly starting earlier than he has done ever before. That’s why it’s so important to be doing the testing now, establishing the baseline, etc. Normally if you’re a pro rider at this point in time you’d be worn out from a long season and a demanding Tour de France, but he’s obviously not in that situation. And so the question is, is he really more fit? Or is he benefiting from having stayed in good shape but is much more well-rested than his peers? The only way we’ll really be able to tell is if he decides to do another season after 2009 and then we look at where he is then vs. where he is now.

So back to the tunnel – what were you hoping to accomplish?

First off, let’s start by saying clearly where Lance was in 2005 was not a bad position, as evidenced by his results. But I recently came down to Austin a couple of times to try out some new positions and ideas I’d had. If you have some thoughts on being more aero and what might work better, now is the time to try that and see how it works out. It’s all about finding the right balance, the right fit between being aero, comfortable (so you can hold the position), and generate the most power. So we start by putting him in the exact same position from 2005. What was interesting about that was when got him on the bike in that manner, he was just seven grams (of drag) off of where he was back then! So aside from him being that good three years later, we also knew the tunnel accuracy was good and the data from that timeframe is still relevant. So now we can look at things like getting lower and narrower as we know those things can improve aerodynamics.

Is this along the lines of what we’ve heard from some of the riders about “hiding behind their hands?”

Yeah – they’re getting behind their hands more, they’re getting lower – you only have to look at how Levi (Leipheimer) and a few other people are riding. But the difference is that everyone has a different way that they fit on the bike. If you’re a lighter climber guy then you probably have a disadvantage over a bigger, stronger Time Trial guy that can put out the watts. So the climber has to compensate by at least being equal in terms of aerodynamics, and if you want to beat them then you probably will have to adapt to something even more to get the aero edge. Traditionally it’s been easier to get results from someone who puts out more watts but has more drag counts than it is for a small guy to be able to gain via an aero advantage.

Yes, but that doesn’t mean just because you have aero bars on your bike that you are better off aerodynamically. At the end of the day the point is to get to the finish line faster than your competitors – not to be the most aerodynamic. So by experimenting with different positions – something we did with Lance and then tried out at the Gruene Time Trials – you can learn what works and what doesn’t. For instance, I know we have positions that we’ve proven in the tunnel to be more efficient, but then on the road we find that they just don’t work as it’s too uncomfortable to sustain or you can’t generate the watts. And then we had a few new positions that are in the “maybe” category and he went to the track to test them out to see if they were sustainable. It’s all about finding the combination of right power and right aero.

Without going into any close held information, do you think you made some progress in this tunnel session?

The question is: What’s progress? Theoretically the big gains are hard to get now… let’s say he’s in exactly the same shape and he rides exactly the same course as in 2005. So if we can find something in the tunnel that takes 10 seconds off of what he did back then, to me that’s progress. It’s hard at their levels to get somebody 10 seconds. So after we’re done here and on the track we will spend a lot of time looking at what positions had the best aero numbers and then what kind of power each position could sustain. And then you also have to consider that if you have found a position that’s significantly more aero but hasn’t shown up on power yet, do you want to spend a lot of time trying to adapt to that position and see if you can get those power numbers up? That’s a hard decision to make, and sometimes it’s a gut call on the rider’s part.

Talk about the correlation of wattage to aero rating...

It is possible to put out less power and be in a better aero position and your net gain is a faster time. Understand that as you go faster your air drag basically cubes; your air resistance is proportionally larger the faster you go. So say that going from 29 mph to 30 mph takes “X” amount of watts, say it’s one watt. But to go from 30 to 31 mph, that might take two watts to get that additional one mph. And that’s why at the top level you don’t see these great gains. If I were to take a male Cat 4 time trialist, he’s obviously out on the course a lot longer than the pros would be. So to improve his ability in terms of overall percentage we would see much greater gains. But at the top level there’s such a close margin between guys like Lance, Levi, and Alberto Contador that the work we do here can and does make a difference, but it’s nowhere near as big a change in overall percentage.

What about gearing? Do you think the pros can ever be limited by what their bike can actually generate?

Not really. The place that gearing may make a difference would be on a specific downhill, and certainly not on a technical descent. And that’s just a case where we’ve all been that you’re just overspinning your pedals and so you go into your tuck.

It hasn’t just been Lance in the tunnel this week, you also had time to spend with young Taylor Phinner, Levi, Alberto…

Let’s talk about Levi – he’s really amazing. He’s one of the guys that really looked at his numbers in the wind tunnel and said, “Look, I really can’t ride well in that position today but in three months I can and I’m going to ride like that.” And through hard work we see that it’s now really paid off for him as he’s regarded as one of the best TT guys in the world today. Taylor has been in the tunnel before and he rides the track where aero position is really important, those guys finish within hundredths of a second from each other. I think with the track guys it’s often about what you ate that day and did you have a twist in your helmet strap that can decide a win or a loss! (laughs) But when you look at the capability of these four guys, they are all so at the top of their game now it keeps getting harder and harder to “find time” for them. So one way we combat this is to not just look for improvements, but work on not making mistakes from what we know works. If we have a dialed in aero position and you have to stay in that as much as possible for an hour, it’s your ability to focus, generate that power, and not make mistakes that ultimately decides who wins. For instance, staying seated and aero on a hill as appropriately as possible before standing and then getting right back into focus as soon as possible.

What’s your opinion on sitting vs. standing on a climb? I noticed at the Gruene TT Lance and his teammate John Korioth didn’t stand at all…

Well it’s kind of an intuitive thing that you have to work on. They scouted the route and while they didn’t see the need to stand, they changed position on their bikes, for instance moving back on their saddles to stretch out and find a more power position, choking back on the bars a little bit, but staying as aero as possible. Certainly standing you create this big parachute, but there can come a time when you simply can’t generate the power and you have to stand and go over it. It’s part intuition, but it’s also from training and learning how hard you really can go and stay seated. So say you’re training for an event. Know the course and then find a climb that’s as close to the one you will have in the race that you can train on. You can then do some self timing on that, for instance go as hard as you can and stay aero until you can’t pedal another revolution, and then stand. Or stand early and see how you do – it’s about finding what works best for you, and that’s known through training and the numbers.

So in your assessment, where do you think Lance is now in terms of where he will be later on in the season?

Hopefully he’s around 90% now, but without looking at the data it’s pretty much a gut call. He’s been spending a lot more time on the road bike than the TT, so just by adapting to the TT bike again we’ll see improvement. But because he’s stayed in such good shape from running and riding his road bike, he can already generate a lot of power. We’ll just have to wait a little as his practice transfers that into efficient power on the TT bike.
Posted by Recovox at 8:16 PM