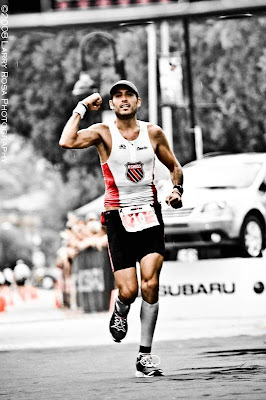 I am sitting on a plane on the way to Kailua Kona, Hawaii, where I will be competing in the 2008 Ironman World Championship. Living in Bend, Oregon suggests that I get to Kona 2 weeks early to get acclimated to the heat and humidity not to mention that it will allow me to spend some quality time with my brother and some friends who are also doing the race. As I got on the plane this morning, I realized something. I am not nervous or anxious about the race at all. It should be the biggest race of my career to date, and an opportunity to show the progress we have made this year. But, still no nerves. As I watch the kid next to me devour a pizza from the airport concessions I realize why- I have already won.

Ten years ago pretty much to the date, I got on a plane to watch my brother Chris race his first Ironman in Kona. A fair bit has changed in my life between that flight and this one. First I had never seen a triathlon before, let alone participated in one, and now I am a professional athlete competing in the Ironman World Championships. Second, I was 245 lbs then and eating that pizza but now I am 170lbs eating a Harvest bar instead. There have been some big changes in the last 10 years, in my lifestyle, my appearance, and me as a person. The unknowing fat kid on the plane 10 years ago had no idea what impact that week's experience on the big island would have on his life.

I had always been an overweight child. Well as far back as I can remember, or as far back as I was in control of my eating habits. I wasn¡¦t a horribly inactive kid, or an absolute pig, I just made poor choices. I was at a manageable weight through grade school, just a victim of the hated "baby fat" (how many babies worth?). Or maybe I was just "big boned" or "husky", which were common theories as well. I attended a small school through junior high where participation in sports was the important thing, not performance or fitness. Just do what made you happy. So participate I did, and found other distractions like the ol' Nintendo and an occasional Ho Ho and Ding Dong. 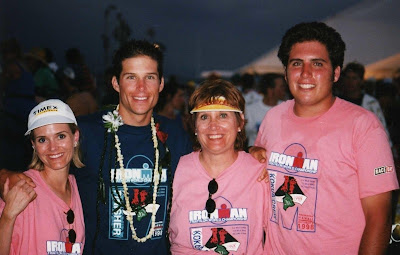 Once in high school, the situation surrounding my weight seemed to snowball. It is what I like to call "the fat to fatter" cycle. It is vicious. Being overweight during the high school years of your life can be quite an experience. I was just like everyone else at that time - trying to find their way, find friends and people who would accept you for what you are while at the same time trying to discover who you are for yourself. Well, for me it was ¡§round boy¡¨ and for those even less creative hooligans it was "Fat Matt". Sweet, thanks guys, that helps a bunch. I believe I ordered the Double Whopper with Cheese.

Yep, you guessed it, I found quite a delightful companion in food. Yes, food provided comfort. It really was a cycle and kind of ironic that the thing I found comfort in was the root of my problems from the beginning. The good bi-product that developed during this time in my life was this sparkling personality that I now posses. I had to be that "funny fat friend" that everyone seems to want to have. "Oh Matt, he's cool, just give him a candy bar and he'll make you laugh."

My college years were better on the social side of things, less jerks, and I was more content with where I fell into society. Well, sort of. I still had bouts of depression about my physical state, only to be nurtured by the buffets at the dorm's eatery. I managed to steal my roommates freshman fifteen, and quickly got up into what I like to call the "mid two's". Yep, I was now floating far too close to the 250 lb mark, and was busting the buttons off my size 38 pants!! Woof. With no real end in site, I unknowingly got on a plane to Kona to support my big brother in his new pastime - triathlon. Apparently, this triathlon I was going to go watch was kind of a big deal and quite an accomplishment for him. All I knew was that I was somehow getting a family vacation to Hawaii out of it.

Our condo for the week was about a half mile up Alii from the outdoor expo. I spent the days before the race mostly mooching free stuff from the vendors and stocking up on as many free "candy bars" as possible. I did notice a difference in the rest of the people that where frequenting the expo. Unlike me, they were less interested in the food, and more interested in the race and what they could do to prepare. And it showed, I had never been around so many fit people in one place. I have to admit my neck was a bit sore from all the double takes of the coed competitors. Although I loved hanging out down town, in my physical state I remember it being incredibly tiring to walk back and forth to the condo. My insulation created a sauna like situation during each walk.

On race day, I was excited to see what this thing was all about, and stoked and nervous for Chris in this endeavor. If it was hot and tiring for me to walk a half mile -- how was he gonna do this? Are you fricking kidding me? Swim 2.4miles, bike 112 miles, and run a whole damn marathon. Na - not gonna happen.

We decided to volunteer to help out during the race and picked up our volunteer shirts. I somehow finagled myself out on the pier while posing as a photographer, and got an up close view of the swim and its pure chaos. After the swim, I hid out in the air conditioning of the hotel till about an hour to go on the bike. Then we went out to our volunteer spot on the run at the "Cop Shop." This was amazing - handing water to these beasts that had already swam and ridden for hours and now were running by almost too fast for me to get them their much needed water. If it took me longer than 20 feet to get the water in their hands, they where on there own - this rig was not able to run that far at their speed.

We volunteered for a few hours and then scooted to the finish line to watch Chris come across. He did it, came across the line happy as could be and there wasn't a dry eye in the house, well in the Lieto house at least. I was surprised at my emotion and the amount of pride I felt for my big brother. I spent the rest of the day, and up until midnight, right on the finish line watching all makes and models come across. Young, old, fast, slow, skinny, chubby, fresh and worked. Needless to say, I was inspired. If a 78 year old man, bent over by a locked up back can do this, I can at least get off my butt and do something. ANYTHING!

Once back home to school, I decided that I had to try another time to change my lifestyle, and that maybe my weight would respond. I changed the way that I ate, cut out fatty foods and anything that was in a box or packaged. I adopted the "King, Prince, Pauper" mode of eating which means, a lot for breakfast, a good amount for lunch and a sparse dinner. Conveniently at the same time I changed my diet, a neighborhood skate park went in down the street. Let's just say both my waistline and my grades plummeted as a result. I was spending up to 5 hours a day skating around the park, and without me knowing it, I dropped 80 pounds in 5 months! Time to find a new wardrobe, and start training for the sport that inspired me.

Long story short, my first triathlon that I trained for went better than I or anyone that I knew thought it would go, and I decided to put some more effort into this thing and prove that just as I had with my weight, that anyone can do anything they want to, if they put their mind to it. Over the next 7 years I moved up the triathlon ladder by going to several National Championships and a World Championships as an amateur. I went from Olympic distance racing to Half Ironman distance, and eventually got my Pro card and started racing full Ironman events. I stayed on top of my nutrition, and with healthy eating and keeping a close eye on my body composition I have been able to keep light and fit. I really enjoyed the consistent challenge to further myself as an athlete and push my limits physically and emotionally. I found that I raced better in tough conditions and discovered that when the going got tough, all I had to do is remember how hard it was to do ANYTHING with that fat suit on, and remember how lucky I am to do what I do.

Soon after I began racing triathlon at a professional level, it became a reality that Chris and I were able to race alongside each other in the pro field. It happens less then we would both like, but we love it every time it happens.

If you asked me 10 years ago on my flight out to Kona, what my chances were of racing there one day, I would have said one in a million. Now, I am happy to say otherwise. To sweeten the deal even further, I get to race alongside my inspiration in the sport and my pick for an upset, my brother Chris. So, if you see me out there on race day with a big ol' smile on my face, and wonder why I look so happy just being there no matter what position I'm racing in, just remember - I have already won.
Posted by Recovox at 4:36 PM