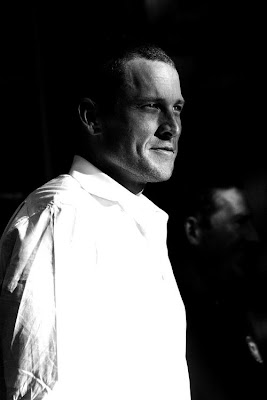 Lance Armstrong left the door open regarding his particpation in the 2009 Tour de France after learning more details about the race on Wednesday. Although he was not in attendance at the race's annual presentation, he offered his comments on the next edition.

"The route of the 2009 Tour de France strikes me as innovative and very interesting," said Armstrong. "From its start in Monte Carlo with a 15km time trial, to the reinstatement of the team time trial, to stages in my old hometown of Girona all the way to another visit to my old friend the Ventoux, I could not have hoped for a different Tour."

"While there has been a fair bit of tension and numerous disagreements with the Tour and its organizers, I am well aware that there is new leadership at [Amary Sport Organization] ASO and I look forward to upcoming conversations and to a mutually beneficial future together," he said. "Whether it's promoting the Livestrong global cancer campaign or making the biggest bike race in the world the gem that it deserves to be, I look forward to next year."

Armstrong addressed leadership concerns and reaffirmed his commitment to his Astana team for next season, regardless of whether he races the Tour de France. "It is illogical to pre-select a leader for any race in October of the previous year. We are blessed at Astana to have the strongest team in the world and I look forward to riding with all of these great riders. I have been around long enough to know that cycling is a team sport and I am fully committed to supporting the strongest rider in any race. Whether that's me, Alberto Contador, Levi Leipheimer, or Andreas Kloden."

Armstrong has not committed to racing the Tour de France in 2009, but he is currently scheduled to race the Tour Down Under, the Tour of California and the Giro d'Italia.

Earlier on Wednesday, at the presentation, Astana's team manager Johan Bruyneel had indicated to us that Armstrong's participation would depend upon a good atmosphere for his rider. "I'd like to have a discussion with the new president of the Tour de France," he said, referring to 32 year-old Jean-Etienne Amaury who succeeded Patrice Clerc in that role. "In normal life, I always attend a party if I'm invited and welcome. If I don't feel that I'm welcome, even if I'm invited, I don't go. Here it'll be the same."
Posted by Recovox at 6:04 PM