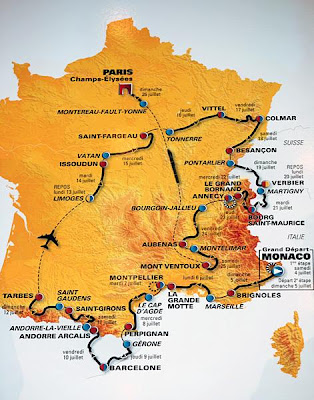 After what was widely described as a modest Tour de France parcours in 2008, the 2009 edition – July 4 to 26 – looks to be far more spectacular. Instead of the final weekend coming down to the usual individual race against the clock, the final showdown will be on the slopes of Le Mont Ventoux – the last of four summit finishes – on the day before the race finishes in Paris.

It will also be the most international Tour for many years as – as well as starting in the Principality of Monaco – it will pass through the countries of Spain, Andorra, Switzerland and Italy before finishing on the Avenue des Champs-Élysées in Paris.

The race will begin on July 4 with a 15-kilometre time trial around the millionaires' playground of Monte Carlo, which will include several iconic sections of the Monaco Grand Prix motor racing circuit, before heading west along the south coast of France. Despite this longer-than-usual first test though, the time triallists will once again feel slightly short-changed with only 55 individual kilometres against the clock.

The team time trial returns, to replace some of those individual kilometres with a 38-kilometre stage in Montpelier before heading south and – as leaks and rumours over the past months have indicated – venture over the border with Spain for a stage between Girona and Barcelona, where the race will visit for the first time since 1965.

As this will be the first time the Tour has started this far south since San Sebastián, Spain in 1992, the clockwise route will visit the Pyrénées before the Alps. The race will then head back into France via a mountaintop finish at Andorra-Arcalis.

Two more Pyrénéen stages – including one over the Col du Tourmalet come ahead of the first rest day in Limoges. A diagonal dash to Burgundy and Alsace will come before hitting the Alps.

The first Alpine stage will end with an uphill finish to Verbiers in Switzerland, where the race will have its second rest day, before heading back to France via Italy and the Cols de Grand Saint-Bernard and Petit Saint-Bernard.

The final time trial of the race will be 40-kilometre around the lake at Annecy, but this will not be in its usual place on the final Saturday, as there will be one more test for the overall contenders before they reach Paris. The final blows in the battle for the yellow jersey will come on a stage from Montélimar to the legendary Mont Ventoux, where the race returns for the first time since 2002.

Unusually, it will be the time triallists who will need to take time from the climbers before the final weekend instead of the other way around.