Basso ends suspension and is back with Liquigas 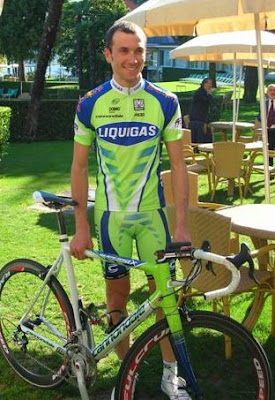 Ivan Basso officially announced his return to racing and contract with Team Liquigas today on the shores of Lago Maggiore, Italy. The Italian cycling federation banned the cyclist, 30, for 16 months for his involvement in Operación Puerto.

"I worked a lot to arrive at this point and in condition," said Basso. "It is important to start over, the first race that is available on the calendar."

Basso will immediately return to racing with the Japan Cup, October 26, two days after his suspension ends. He travels there immediately with four teammates and directeur sportif Stefano Zanatta. His last race was the Vuelta a Castilla y León, which ended on March 30, 2007.

He will start his 2009 season with the Tour de San Luis, Argentina, and the Tour of California. He will then focus on Italian races and the Giro d'Italia, a race he won in 2006. "Certainly, all of the dreams I had in 2006 are still there and certainly I want to take the maglia rosa again." 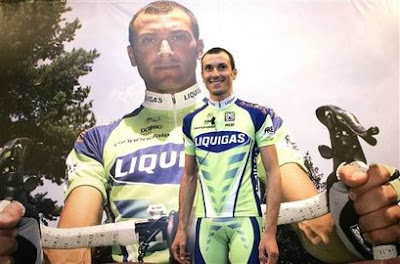 Basso left on the eve of the 2006 Tour de France when Spanish papers linked him to Spanish Doctor Eufemiano Fuentes, centre of 2006's Operación Puerto doping investigation. He briefly returned to racing in 2007 before a formal investigation. He was banned from racing on June 15, 2007, for his links with Fuentes. During the hearings, he admitted to the Italian Olympic Committee (CONI) prosecutor that he gave blood to Fuentes.

"I paid for something, and this gives me serenity," said Basso of his suspension. "I served my two years and I am not concerned about the others."

Liquigas announced in April it signed Basso for two years. Despite his competition ban, Basso is training vigorously for his return.

"He wants to start in the Japan Cup to take the most of his training over this time," said Team Manager Roberto Amadio. "He will start 2009 in Argentina; it is a tranquil place that will help him find himself in the gruppo."
Posted by Recovox at 9:50 AM