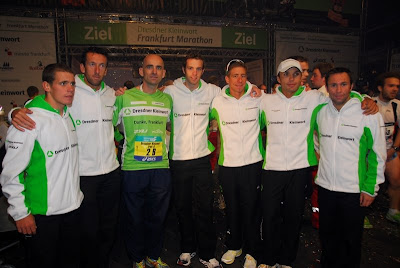 The athletes of the Dresdner Kleinwort Triathlon Team competed at the Dresdner Kleinwort Frankfurt Marathon and celebrated their end of season together with their fans. Only two weeks after the World Championship in Hawaii, seven of the world’s best triathletes Normann Stadler, Maik Twelsiek, Markus Fachbach, Jan Raphael, Mathias Hecht, Marino Vanhoenacker and Scott Neyedli were taking part in relays - splitted in two groups. The second relay was completed by a fan of the team, Klaus Born from Mainz.

The Team “Dresdner Kleinwort Iron I” finished first with Normann Stadler crossing the finish line after 2:27:25. “It means a lot to us to finish the season at Dresdner Kleinwort Frankfurt Marathon”, says team captain Normann Stadler. “After a long and hard season we meet here in Frankfurt to enjoy the great atmosphere at the track and also at the finishing line. It is amazing to see how much enthusiasm thousands of runners put into this marathon. The support of the fans in Frankfurt is really fantastic.” 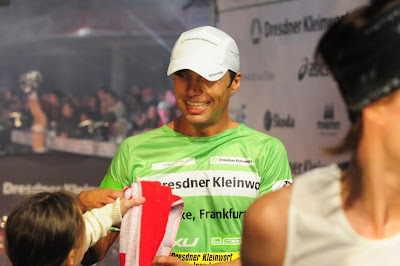 The team is looking back on a successful season. Overall, in 2008 the team achieved nine race wins, five second and two third places. In addition to that, the team succeed at the hardest Ironman competition in Hawaii on October 11th with three athletes finishing top 15.
Posted by Recovox at 10:33 AM