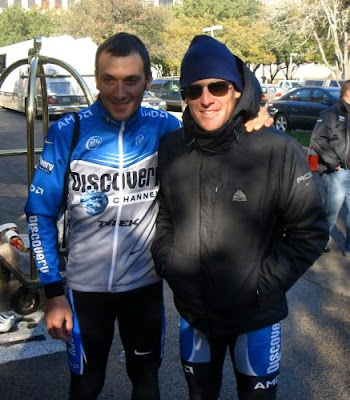 The 2009 race programme of Lance Armstrong is becoming clearer, as the American will participate in the Giro d'Italia. The three week-race runs from May 9 through May 31, 2009.

Armstrong told Gazzetta dello Sport that he was looking forward to the Corsa Rosa. "I can't wait until May, I am so excited to be coming to the 2009 Giro d'Italia. I raced a long time professionally and I never did the Giro. It is one of the biggest regrets I ever had."

Armstrong added that 2009 will be a perfect opportunity to change this. "Fortunately for myself, I get to erase this regret and be there at the 100-year anniversary and who knows maybe with a good result." The latter statement indicated that the ambitious American will not just want to finish the race and hope to raise awareness for his global cancer campaign.

With the earlier preparation races in Australia and the United States, Armstrong looks set to do a good Giro. Armstrong then proceeded to greet the Italian tifosi. "I am looking forward to seeing you all and arrivederci."

Angelo Zomegnan, the head of RCS Sport that organises the race, welcomed Armstrong. "The relations between me and Armstrong were intact even when he retired in 2005. This year I sensed there was a possibility that Lance would return. This perception became concrete after his extraordinary performance on August 9, at the Leadville 100."

Zomegnan then took action. "I officially invited Lance to the Giro on September 29, during my trip to Austin, Texas."

Armstrong had previously announced that he will ride the Tour Down Under and the Tour of California.

His announcement of racing the Giro may be an indication that Armstrong's teammate, Alberto Contador, will be the protected rider in the Tour de France. The Tour de France is Contador's only objective for the season.

Armstrong made a surprise return to professional racing in September this year.
Posted by Recovox at 9:06 AM